In the controversial video with Richard ‘Professor Griff’ Griffin, the 39-year-old rapper repeatedly referenced deeply offensive conspiracy theories and rhetoric about the Jewish community on his podcast, Cannon’s Class.

After failing to ‘acknowledge or apologize’ the comments, ViacomCBS fired him and Cannon took to Facebook with a lengthy statement.

ViacomCBS spokesperson said in a statement to Variety that the company’s relationship with Cannon due to his interview’s promotion of ‘hateful speech and spread of anti-Semitic conspiracy theories.’

‘While we support ongoing education and dialogue in the fight against bigotry, we are deeply troubled that Nick has failed to acknowledge or apologize for perpetuating anti-Semitism, and we are terminating our relationship with him,’ the organization explained.

Additionally, the group vowed to do ‘better in our response to incidents of anti-Semitism, racism, and bigotry.’

The former America’s Got Talent host has had a relationship with Viacom since his Nickelodeon days in the Nineties.

On Monday Cannon wrote on Facebook: ‘Anyone who knows me knows that I have no hate in my heart nor malice intentions. I do not condone hate speech nor the spread of hateful rhetoric.’ 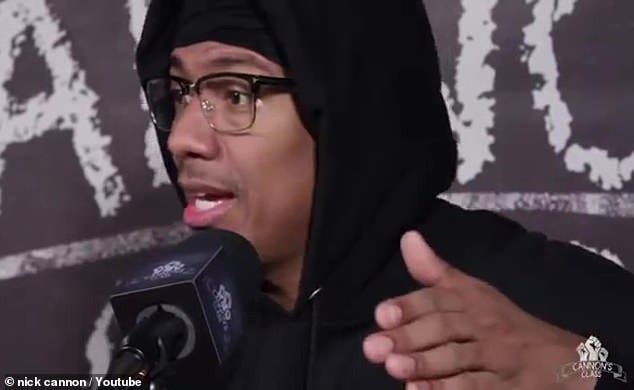 He added: ‘The Black and Jewish communities have both faced enormous hatred, oppression persecution and prejudice for thousands of years and in many ways have and will continue to work together to overcome these obstacles.’

Additionally, Cannon called himself an ‘advocate for people’s voices to be heard openly, fairly and candidly.’

‘In today’s conversation about anti-racism and social justice, I think we all – including myself – must continue educating one another and embrace uncomfortable conversations – it’s the only way we ALL get better,’ the father-of-three continued.

As he encouraged more ‘healthy dialogue’ from experts, clergy, or spokespersons, he reiterated his intentions are to show ‘that as a beautiful human species we have way more commonalities than differences.’

Cannon also clarified why his remarks and statement don’t contain the words ‘sorry’ and ‘apologize’ to Fast Company.

‘To me apologies are empty. Are you forcing me to say the words ‘I’m sorry’? Are you making me bow down, ’cause then again, that would be perpetuating that same rhetoric that we’re trying to get away from,’ Cannon said. 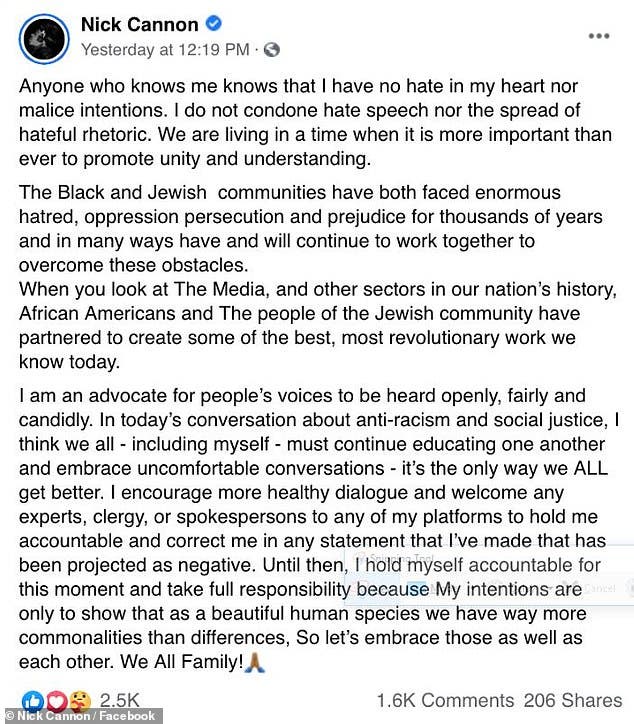 He furthered: ‘What we need is healing. What we need is discussion. Correct me. I don’t tell my children to say, ‘I’m sorry.’ I want them to understand where they need to be corrected. And then that’s how we grow.’

In the June 30 episode, Cannon said Black people are the ‘true Hebrews’ and also theorized about ‘going as deep as the Rothschilds, centralized banking, the 13 families, the bloodlines that control everything even outside of America.’

Cannon said that white people of the past were ‘savages’ and ‘barbaric.

He later said on the podcast, ‘You can’t be anti-Semitic when we are the Semitic people. When we are the same people who they want to be. That’s our birthright. We are the true Hebrews.’

Meanwhile, his ex-wife, who he shares nine-year-old twins Moroccan and Monroe, shared a snap of her pup with the tone-deaf caption: ‘It’s a ruff summer.’

In the picture, her Jack Russell Terrier can be seen sporting a pair of googles on a lounge chair by her pool.

The Most Surprising Celebrity Transformations of the Week