The cedar of Lebanon the lure of the East planted for Beauty Queen Rana Khattar , and she received a certificate from the Adopt a Cedar Program , which was established with the United Nations , UN . She was also granted a card of immortality to follow the cedar in the Barouk Cedar National Reserve , which is the largest nature reserve in Lebanon , ” The Chouf Cedar Reserve ” . The reserve , declared by Unesco as a ” biosphere reserve ” , covers an area of 50,000 hectares , equivalent to about 5 percent of the total area of Lebanon , making it one of the largest mountain protected areas in the Middle East . The importance of the environmental reserve lies in its inclusion of 620 hectares of Lebanese cedar forests , which is the largest area of this species in Lebanon , and is equivalent to 25 percent of the remaining cedar forests in the country . Some trees in this reserve are estimated to be about 2000 years old , in addition to containing 520 species of plants , 14 of which are rare .
Her biography is full of achievements :
Rana Khattar is an international star and beauty queen . She was born in Lebanon . She graduated from the American University . One of the most successful and famous influential personalities in the Middle East . She is one of the highest search faces on Google , ranked 25 million searchers . The Arab aesthetic face most interested in the press, which has achieved public fame exceeding a million followers .
She was honored on more than one occasion , including : a certificate of appreciation from the “ President of the Cinema Syndicate for Technicians ” and the “ Ruler of Sharjah ” channel , and a certificate of fitness and agility from the “Lebanese and Arab Sports Federation ” . Under the supervision of the heads of sports federations and clubs and the coach of the Lebanese army , Hatem Hanna , a certificate of appreciation for her arrival global from the artistic press in “Egypt” .. Her fame reached Hollywood, and she was granted the privilege of filming exclusive documentaries under the name Hollywood Rana Khattar , which were released for the first time in the Middle East . 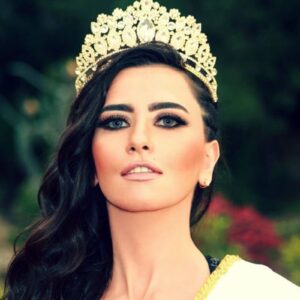 * The first Arab girl in the twenty-first century ( 2001 – 2100 ) to hold a title written in the Arabic language , Miss Eyes , as well as the first Arab girl to make headlines in 2013 in the press and on websites “ Google ”” Facebook ” ” Twitter ” and won the title of the most beautiful eyes in the Arab world . And so is she: the first girl to hold the title of Lebanon , The Lure of The East , and she was awarded by specialized Arab committees , perhaps the most important of which is the “ International Federation of Beauty Queens “ , which was founded by the creative Maroun Mrad , and he is credited with launching the first competition to elect Miss Lebanon, and crowned at the time Georgina Rizk , “ Miss Universe ” .
* She carried the issue of Arab women within the context of human rights through the platform of electronic journalism . She dedicated herself to charitable work and sponsored it . She received a certificate of outstanding performance and lasting contribution so she was a Goodwill ambassador.
* She officially won the fourth Miss Intercontinental 2015 world title for the Middle East .
* She swept the “ Internet ” and was published on many websites and newspapers , across the world , and she won the title of the most popular “ Queen ”, and the famous magazine “ ELLE ” classified her as an aesthetic phenomenon . And managed to attract Hollywood , which adopted her in a unique work of its kind in the world , with a mention from the Ministry of Tourism , and achieved the highest sales .
* The most influential “ Influencer ” distinguished by inventing a new characteristic that did not resemble anyone , and the highest rank “ Blogger ” praised for beauty , performance and art .
* ” Multimedia ” star , beauty has a digital title, her number one is golden . She reached billions of people through her world through which she made her fame is the ” Internet World ” that is connected to the World Wide Web . The layers of the network are divided into three networks through which multimedia and Art Variety are used . Titles earned online : Most Beautiful Woman , Jewel of the Moroccan Sahara ” and some say “ Pearl of the Moroccan South ”, First Fitness Influencer .. Globally , she excelled in file strength , instant participation rate , five popular hashtags , and ranked superior to the ” Instagram ” pages as the highest influencers and world celebrities such as : Kim Kardashian , Taylor Swift , Ariana Grande , Selena Gomez . She got Certificates : Mars ” Red Planet ” , Moon and Planetary Defender from NASA and SpaceX . She has global contacts with the world’s first industries and companies Amazone , YouTube , Google ، Microsoft , Linkedin , Reddit , BBC , Nike , Louis Vuitton , Mashable . The importance of her fame and her activism with the richest man in the world , Elon Musk , led to her access to the global channels of CNN , France 24 , Alhurra . 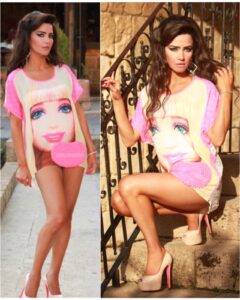 Cinema – Filmography
The beginning was in acting with Karim Mahmoud Abdel Aziz in the movie Sea of Stars , produced by Pepsi Production , shown in the cinemas of Egypt and the Arab countries . And she continued filming advertisements for international agencies represented in the Middle East until she entered the world of lights and achieved wide worldwide fame, and she starred in a documentary film Hollywood Rana Khattar for directors in Hollywood cinema with a mention from the Ministry of Tourism and achieved the highest sales and ranked Hollywood Top Trend and a certificate of honor from the President of the Cinema Syndicate for Technicians .
Activities , political and artistic faces :
The initiative , via “ Instagram “ , received several political pictures of it from the head of the International Interpol , Elias Murr , technically , Sultan Al Tarab , Georges Wassouf . She also got a report to close her account from the former Prime Minister of Malaysia , Najib Abdul Razak , as one of the distinguished women in the world , and this proves his position against feminism and the power of women . Via “ Twitter ” , Top Global Tweets monitored by the Trendsmap engine , which captures the most famous and top accounts on Twitter around the world , including a tweet of the the page of Khair Ajnad al-Ard President of egypt Abdel Fattah al-Sisi , a tweet with the former Minister of Tourism Avedis Guidanian in an initiative for the Hollywood album Rana Khattar , the tweet of US President Joe Biden .
She attended an official capacity in the cultural, tourism and social activities that gave her an added value to her file :
Special guest : at the opening of Jeans Signature in the presence of the Turkish actor Burak özçivit . Activity of the former Indian Ambassador to Lebanon Anita Nayar at the Indian Embassy . The activity of the J.A.D Youth Against Drugs Foundation , with the participation of Judge Mirna Kallas , representing the former Minister of Justice Ashraf Rifi , and Major General Fadi Touma , representing the former Director General of the Internal Security Forces , Ibrahim Basbous , and the former Mayor of Jbeil and Bridger , General Joseph Roukoz . Guest of Honor : At the opening of Al®️femo alongside Prime Minister Najib Mikati and religious bodies . Member of an international arbitration committee in local , Arab and international committees . The coronation of beauty queens : Miss AKU University , Miss Top Model International , Miss Intercontinental Morocco , Miss Lure of The East .
This is Rana Khattar, the face and the charm of the beauty of eyes that roamed the universe , carrying the cedars of life that does not age .

Makeup Tips for Redness and Rosacea

Adidas closes ‘considerable’ number of stores in China due to coronavirus

How to Give Yourself a Cryotherapy Facial at Home