Several rocky fragments have been recovered from the fireball that lit up the sky above southern England just over a week ago.

They came down in the Winchcombe area of Gloucestershire.

A householder first alerted experts after noticing a pile of charred stone on his driveway. Other members of the public have since come forward with their own finds.

It’s 30 years since meteorite material was last retrieved in the UK.

Researchers are particularly thrilled because of the rarity of the rock type.

It’s carbonaceous chondrite – a stony material that retains unaltered chemistry from the formation of our Solar System 4.6 billion years ago.

Dr Ashley King from London’s Natural History Museum (NHM) said nothing like it had ever been recorded in the UK before.

“Carbonaceous chondrites are particularly special because they are essentially the left-over building blocks of our Solar System.

“Many contain simple organics and amino acids; some of them contain minerals formed by water – so, all the ingredients are there for understanding how you make a habitable planet such as the Earth,” he told BBC News. 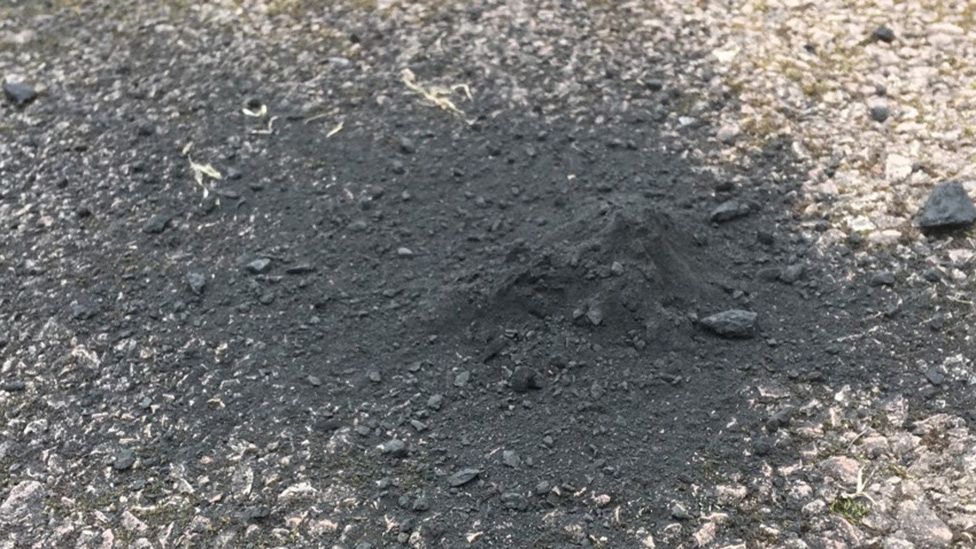 Thousands of people reported seeing a blazing light rush across the sky at 21:54 GMT on Sunday 28 February. But, crucially, the event was also captured on the array of special cameras operated by the UK Fireball Alliance (UKFAll).

Their information was able able to pinpoint the likely area of debris fall.

“Somewhere north of Cheltenham, over towards Stow-On-The-Wold”, was the prediction. This would still have been “a needle in a haystack” quest, but researchers were in luck.

Some of the meteorite had smashed down on to a Winchcombe resident’s front drive.

Dr Richard Greenwood was despatched to see the Winchcombe resident, who wishes to be anonymous.

“I looked in this plastic bag he’d been told to put it in, and my legs went wobbly. It was unbelievable. This is a very special meteorite,” the Open University researcher recalled.

A search team was immediately sent out to comb the local area for more fragments. And, in the meantime, other property owners started notifying scientists of their discoveries, too.

The pieces are small – marble-sized. Prof Monica Grady, also from the OU, describes them as looking like “a broken barbecue briquette. It is one of the most beautiful things I’ve ever seen”, she told BBC News.

It’s hard to overstate just how significant this is for British meteoritic science.

Of the approximately 65,000 meteorites in collections worldwide, only 1,206 had eyewitnesses to their fall, and of these only 51 are of the carbonaceous chondrite type.

Because this fireball was tracked via camera on entry to Earth’s atmosphere, its orbit has been worked out. The object came from the outer asteroid belt, out towards Jupiter.

This means its composition almost certainly will be very primitive.

“Basically, that’s part of the Solar System we regard as like a deep freeze of material that’s 4.5 billion years old,” explained the NHM’s Prof Sara Russell.

“It hasn’t had a chance to change at all from pre-planetary time. It will give us an insight into what our Solar System was like before the planets were there.”

The American and Japanese space agencies have despatched probes to bring back similar material from the asteroids themselves. But the Winchcombe meteorite would make almost as good a subject for study, said Dr Greenwood.

“Yes, it will have been affected by passage through the atmosphere, but it must be very close to pristine. The chap in Winchcombe who collected it did so within 12 hours of falling. It’s as good as you will ever get collected here on Earth.”

The last space rock fall recovered in the UK was in 1991 – the so called Glatton Meteorite, because it fell in the village of Glatton near Peterborough.

Mr Arthur Pettifor was tending his onions in his garden when a 10cm rock dropped into his hedge.

Scientists urge people in the local area to remain vigilant. They should be looking for small blackish stones, or even a mound of dark dust.

Anyone who finds what they think might be a meteorite is asked to photograph it in situ, noting the GPS co-ordinates from a phone, if that’s possible.

The object should then be placed in foil without direct handling. And the absolute no-no: do not put a magnet near the material. This could destroy important information needed to study the rock.

The Winchcombe investigation has also included scientists from the universities of Glasgow, Manchester, Plymouth, and Imperial College London.

The Pfizer Vaccine May Not Work on Obese People – Study