What can white cotton underwear tell you about the health of the soil in your farm or garden? Quite a lot, it turns out.

Hundreds of people – from farmers to schoolchildren – are burying their cotton underwear in their back gardens to dig up eight weeks later as part of a citizen science project called the Soil Your Undies Challenge that began in the United States before spreading overseas and is now gathering momentum in Australia.

Cotton is made of a sugar called cellulose, making it a tasty snack for microbes and the army of other tiny decomposers that live in the soil. The state of the garments when they are retrieved will indicate the health of the microbiome. If there is not much left of the cloth, then the soil is healthy and teeming with activity. If it is mostly intact, then work is necessary to improve the situation.

Oliver Knox, a senior lecturer at the School of Environmental and Rural Science at the University of New England in New South Wales, and CottonInfo, the Australian cotton industry’s joint extension programme, are behind the effort, which started in 2018 when Knox and Sally Dickinson, a regional extension officer with CottonInfo, asked 50 farmers if they would be willing to bury their underwear for science.

“Not only did they do it, but they were competing with each other, saying things like: ‘My soil is better than yours because I have more degraded pants,’” said Knox, laughing.

A healthy soil microbiome is the lifeblood of plants and can accelerate growth and even bolster resistance to disease. Experts believe that it can also affect the nutritional content of our food.

Farmers whose briefs indicated poor soil health began exploring ways to regenerate their land, such as by changing their crop rotation or leaving more stubble on the ground. “It got them all thinking about soil and we realised it was a beautiful, accessible way to make a soil assessment available to the public,” Knox said. “That’s what I love about the project.”

Since then the Soil Your Undies campaign has spread among tightly knit farming communities and schools have also joined up.

An estimated 400 people have since buried their undergarments across the continent, allowing scientists to explore soil health around different parts of Australia, as well as collect data for other research. People are now coming forward to submit their results on CottonInfo’s map.

The Australian project also differs from the rest of the world in a key way.

Elsewhere, people would leave the elastic waistband peeking out of the ground as a marker but during the first trial, Knox discovered the drawers had been stolen during the night.“School students and their teachers are really excited to learn about the world beneath their feet,” Michelle Cox, a Soil Your Undies coordinator and soil science communicator told Al Jazeera. “But, like the vast majority of people on the planet, they know very little about the soil, and haven’t really given much thought to how it functions and how important it is to our wellbeing, and that of all life on our planet.”

A government-funded national citizen science programme, Soil Your Undies kicked off as a pilot project with six schools in September 2020 while another six will be part of the project by the coming July. They eventually hope to roll it out nationwide.

The children report that most of the soil in which they buried underwear or sampled worms had little soil life and very few garments showed considerable degradation.

Cox is not surprised because many of the sampling sites were on school grounds, which are often in mown grass areas with high foot traffic and therefore likely to be too dry, compacted or lacking in the organic matter that is essential to supporting the soil microbiome.

In contrast, sites that gave very good results were either well-mulched, near composting areas or close to diverse plantings. Notably, the University of New England team in Australia found that the soil microbiome can collapse in earth that has been exposed to droughts or floods, so as climate change drives more extreme weather events, our soil could be affected as well

As students mine additional data from their soil samples, they will be able to fill in more pieces of the “soil puzzle” and develop an in-depth understanding of soil health, how to create and maintain it and even suggest ways to prevent problems from happening in the first place.

“Many scientists agree we have less than 60 years of topsoil left on our planet, less than 60 harvests,” Cox said. “However, if we adopt practices which rebuild our soil microbiome and therefore the soil’s health, resilience and productivity, we can avoid this catastrophe.”

Lessons for the future

Back in Australia, Belinda Waldorf and her students at the Armidale Waldorf School in northern New South Wales are among those reporting back to Oliver Knox and the team at UNE.

They buried a pair of undies in the school garden and were pleased to find the pair had disintegrated eight weeks later.

Waldorf says the experiment has fed into existing student activities, which include running the school’s worm farm, composting school waste, and organic farming on the premises.

“I think students are much more aware of how changes in the way we farm and grow food, even on a small scale, can have a significant impact on the environment,” she said.

A Journey Into Egypt by Past Western Travelers

Shark Skeleton That Lived 150 Million Years Ago Found in Bavaria 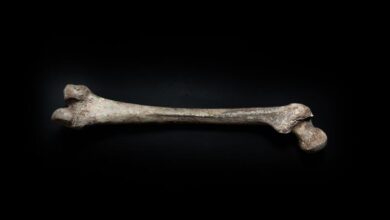