The three white men who murdered Ahmaud Arbery chased down the young Black man and subsequently killed him because of “racial assumption”, a United States federal prosecutor has told jurors at the defendants’ hate-crimes trial.

Attorneys from the US Department of Justice stressed during closing arguments on Monday that the trio acted out of racial animosity when they pursued Arbery while he was jogging through their Georgia community.

Defence attorneys said the men believed they recognized Arbery from previous videos showing a trespasser on a nearby property, and they were trying to protect the neighbourhood.

Arbery, 25, who was out for an afternoon run, was seen as a criminal by the defendants for no other reason than his skin colour, Christopher Perras, a special litigation counsel for the US Justice Department’s civil rights division, said.

“They saw a Black man in their neighbourhood and they thought the worst of him.”

The trial coincides with the second anniversary of Arbery’s murder on February 23, 2020.

The trio were convicted of murder in state court last November, and early in 2022, a judge sentenced them to life in prison. The McMichaels were given life without parole, while Bryan could be eligible for parole after 30 years.

The ongoing federal trial seeks to determine whether the murder was a hate crime, with the three defendants charged with violating Arbery’s civil rights. They face sentences of up to life in prison if convicted.

During the trial, prosecutors presented evidence showing that the defendants shared racist text messages and social media posts in the years and months preceding the shooting.

In 2018, Travis McMichael commented on a Facebook video of a Black man playing a prank on a white person: “I’d kill that f***ing n*****.”  And for years, Bryan wrote messages mocking Martin Luther King Jr Day.

Defence lawyers have argued that the three men wanted to protect their neighbourhood and did not pursue Arbery because of his race. AJ Balbo, a defence attorney for Gregory McMichael, called Arbery’s killing “an American tragedy”.

To underscore that point, the defence said that in 2019, the older McMichael contacted the authorities about a white homeless man living under a nearby bridge after suspecting him of committing theft in the neighbourhood.

The lone defence witness, a neighbour, testified that she spotted a white man camped out under the same bridge sometime in 2019, but said she didn’t know if it was the same person the McMichaels had reported to police.

“There is no evidence of any acts of racial violence by Travis McMichael,” his defence lawyer said on Monday.

Attorney Amy Lee Copeland also said there was no evidence that McMichael “ever spoke to anyone about Mr Arbery’s death in racial terms”. 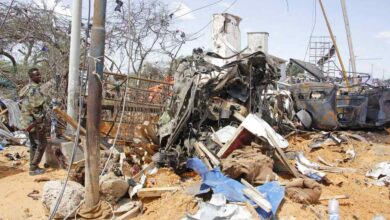 What to expect from Kuwait’s parliamentary election