A French policeman who intervened during the 2015 Paris Bataclan terror attacks was ‘overcome with emotion’ yesterday after tracking down and recovering a stolen Banksy tribute to the attack.

Italian authorities unveiled the artwork today after it was discovered Wednesday in the attic of a small farmstead in the Abruzzo region of central Italy, rented by Chinese nationals – who were ‘oblivious’ to the painting.

The artwork, which depicts a sorrowful girl in mourning, was cut out and snatched from the Bataclan concert hall in Paris in January 2019.

It had been painted on the emergency doors of the venue as a tribute to the 90 people who were murdered there by Islamist extremists in November 2015 in a series of terror attacks across the city.

Today it was revealed that the painting had been found by a French policeman who had heroically intervened during the terror attack, and had witnessed victims gunned down.

His colleague told how the officer had been overcome with emotion on seeing the stolen work again.

Christophe Cengig from the Organised Crime Unit at the French embassy in Rome  said: ‘It was a very emotional moment for my colleague. We’ve known each other for 20 years. He intervened at the Bataclan attack. What he saw inside, such tragedy, all those bodies… This is a huge achievement for him,’

He added: ‘Coming here, finding it (the work)… it has a strong symbolic and emotional value, so we’re very, very, very happy’.

There was forensic work to be done and the door would need to be transported carefully, ‘but it’s going back to France’.

A joint raid between Italian and French police led to the discovery of the work in Italy’s Abruzzo region, to the east of Rome.

Officers said the Chinese family living in the home did not appear to be connected to the crime.

L’Aquila prosecutors said the work had been ‘hidden well’ in the attic, which others outside of the family had access to.

No arrests have been made.

L’Aquila Prosecutor Michele Renzo added that authorities believed the motivation for the theft was economic, not ideological.

Authorities said they were still investigating how the artwork arrived in Italy and the role of the Italians involved. They said the discovery was the fruit of a joint Italian-French police investigation.

Works by Banksy, known for their distinctive style, irreverent humour and thought-provoking themes, have been found on walls, buildings and bridges from the West Bank to post-Hurricane Katrina New Orleans.

At auction, they have sold for more than one million dollars.

The girl in mourning was created when the artist ‘blitzed’ the French capital with murals during a whirlwind 2018 trip, which he said was to mark the 50th anniversary of the Paris student uprising of 1968.

‘The work was found under a roof, in an attic, leaning against a wall,’ Italian police colonel Emanuele Mazzotta said.

‘It appears to be in good condition’.

The police said the farmstead was owned by an Italian, but they were not able to provide any further details during an ongoing investigation.

Police are looking into an Franco-Italian band of criminals, and say the farmstead was owned by an Italian who was born in France but may not be connected to the gang, reports The Messaggero daily.

At the time of the theft a police source said that ‘hooded villains came to steal the work before taking it to a truck’, which could have been sold for millions.

An alarm triggered inside the theatre at around 4.25am and police discovered a screwdriver close to where the painting was snatched. The work had been cut out using an angle grinder, authorities said at the time.

One witness reported seeing a white pick-up truck and three suspicious people nearby.

Banksy is believed to have started out as a graffiti artist in London, although he has kept his identity a secret.

The portion of the Bataclan door is not the only of his works to have been stolen from Paris.

They included a mural of a businessman in a suit offering a dog a bone, having just sawed the animal’s leg off, and an image of a masked rat wielding a box cutter, which disappeared from outside the Pompidou Centre.

Some of the stolen works have since been recovered and fans have covered some of his Paris street art with Plexiglass to protect them. Palestinians Get Into The Ramadan Spirit With Fire and Musical Performers

Virtual Education Has Never Been as Easy as it is Today!

Saudi Women Turn to Sport Clubs as Encouraged by The State 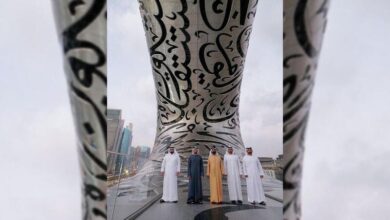 Take a Close Look at UAE’s Museum of The Future