Sometimes, when I am still inside and touch the trunk of a tree, I feel its living memories: the sharp teeth of leaf-eating caterpillars, the smell of fresh, life-giving rain, sparrow songs, and summer cicada chants, the chill of the first freeze, tiny ant feet brushing soft spring leaves. I feel the memories of long, painful droughts, along with glorious times of plenty. I feel the lungs of our earth, breathing in and breathing out.

The memories of trees are written in every branch, leaf, and root, and are visibly recorded in the rings that wrap around its heartwood. The memory-rings reveal tree growth patterns, age, rainfall, temperatures, fires, snowfall, volcanic eruptions, and the overall health of the ecosystem from which it came.

Like trees, memories live in every part of us.

Memories make meaning, defy time and fly across the years. Yet they can be elusive, selective, true or false. Some memories mend us, other memories need to be mended. Memories can stand between us and the life we want to live. And sometimes, what we have forgotten may be far more powerful than the memories we remember.

Growing up, I memorised the memories of my parents and grandparents and begged to hear their stories.

“Tell me again,” I would plead, “what was it like to get your water from a well?”

“What was the name of Uncle Benny’s pet crow?”

“How did you cure meat in the smokehouse?”

“What was it like to grow your own food?”

That was how I understood their lives, and eventually my own, through the rich storehouse of their memories.

As a therapeutic musician, I have listened to hundreds of memories. Teachers, doctors, rubbish collectors, lawyers, preachers, farmers, accountants, artists, plumbers, housewives, an Oscar-winning actress. I have learned to pay close attention to what people remember, especially at the end of their lives. The themes woven into end-of-life memories are mostly the same, though the individual’s details are different.

Memories of what lies unresolved in the human heart, hidden by a busy life, suddenly revealed in the final hours. Memories of tender mercies granted by strangers. Memories of vows kept and promises broken. Memories of love that let go too soon, or held on to too tight.

A seven-year-old girl’s tears
What will you remember most clearly at the end of your life?

My mother’s father vividly remembered the children’s Sunday school class he taught for 30 years, and the nightly prayers he prayed with his wife, Lucy. He remembered the beatings from his alcoholic father, and he remembered the promise he kept to never lay an angry hand on his own children.

At the end of her life, my grandmother recalled every slow-motion detail of the day she saved her oldest son’s life when he was bitten by a rattlesnake. How she made a tourniquet out of her apron and placed it around the bite on his ankle. How he turned blue and black all over. How he bled through his eyes and the pores of his skin. What she remembered the most was her son’s terrible pain. “His suffering was something that could never be forgotten,” she said.

A 101-year-old woman once told me her most vivid life memory was the day of her mother’s funeral. She was seven years old. Later, her relatives argued among themselves about who would “have to take care of her”.

She remembered the cream-coloured walls of the room where the arguing took place, the faded picture hanging above the fireplace of an old man praying, and the smell of a hot pecan pie sitting on the kitchen table.

She remembered how her grandfather’s voice trembled when he said: “We’ll do it. Her grandmother and I will take care of her.” And she remembered the flood of relief that washed over her as she looked down at her small shiny black shoes with the silver buckles.

“I am everything I am today because of my grandparents,” she said. “I’ve lost a husband, and I’ve lost a child, but no day stands out more in my life than that one day. The day they took me in.” And she cried fresh tears during the telling, a 101-year-old woman, crying the fresh tears of a seven-year-old girl.

Others remember words they wish had gone unsaid. Words, if they could somehow take back, would now ease their dying, and would have eased their living too.

Some gain wisdom and peace through their remembering. They see rich meaning in the fragments, and the whole of their life finally comes together, moments before it is gone.

I lost the sky
I completely lost my memory once in a car accident. I was 15 and knocked unconscious when my head hit and shattered the front windshield. When I woke, I found myself stretched out on the grass beside the car, my head throbbing, and resting in the lap of a kind stranger.

I found the sky so profoundly beautiful that I could not see or feel anything but the sky. Not the woman holding me, not my hurting body, not the crashed car, not the gathering crowd. I could not speak. All I wanted was to stay wrapped up inside the sky’s loveliness, the sky’s openness, to be held in the foreverness of its light.

“What happened?” the woman gently asked, still holding me, stroking my head.

“What is your name?”

Could she not see that was all that mattered? Names did not matter. I did not even matter.

Did I have parents?

I only knew the sky.

The more she questioned me, the more confused I became. My head ached, and her questions, like a dark veil, closed around me. I could not answer any of them. I felt foolish, stupid. I closed my eyes. I lost hope. And I lost the sky.

“The ambulance is on the way,” she said, her voice filled with concern.

Later, in the emergency room, when I looked into the eyes of my mother, my memory slowly began to come back to me, in broken pieces. But it would never quite be the same again.

When I work with those living with Alzheimer’s and dementia, I remember how that confusion felt.

“I’m not married,” another repeatedly told her husband of more than 60 years. “And I’ve never been married.”

Their lives have no context, they are always falling, falling, falling. They have no foundation to build their life upon, no memories to stand on to tell them who they are.

I have sat with sobbing families who could no longer bear the painful indignity of this disease in their loved one, and over time, stopped visiting.

Where is the sky for these patients, their families, who have lost so much? Where is their hope?

A brief respite, for many, can be found within old folk songs and dusty hymns, where pieces of their lives come home to them. Memories carried on the wings of melody and lyric that have more life in them than most sermons ever heard, pills ever taken, games ever played, or movies ever watched.

Mama’s gonna buy you a Mockingbird.

And if that mockingbird don’t sing,

“That was my mother’s favourite song,” one woman, who did not know her own name, tenderly said. “She would sing it to me at night. No matter how tired she was after a long day’s work, she would sing it.”

“What was your mother’s name?” I asked her.

She smiled and shrugged, still wrapped up in the comfort of the memory. “Oh honey, I don’t know.”

‘I know why I’m still alive’
One of the first symptoms of Alzheimer’s is the inability to acquire new memories. Then, what was held most dear, slowly withdraws – the spoken and written word, the taste of favourite foods, the desire for touch, favourite television shows, faces of loved ones – and still, in the midst of all the loss, some can sing every word to You Are My Sunshine, and smile deeply into their life while they sing it.

There is a mystery and power in music I have never wholly understood. A power able to reach into the unseen parts and bring back a memory that will part the sea of darkness, often for only a moment; but a moment that is worth everything. “I know why I’m still alive,” a woman said, after remembering a song she and her mother sang together while they sat and shelled peas on the back porch.

Once, I was working with a group of a dozen or more Alzheimer’s residents in a locked unit, and something different, something unexpected, happened. We had been singing and drumming for about 10 minutes when suddenly the residents began singing their feelings. It was spontaneous, natural, and felt completely right.

Several in the group sang “lonely”, others sang “fear”, and one or two sang “blue”.

“Why do you feel lonely?” I asked, unsure if I would get a cognisant answer.

“Because I have lost the people I love.”

“I can’t talk with other people.”

“Because there is no hope.”

“Because I don’t taste the food any more.”

“Because I’m here, in this place, and not at home.”

They answered with a sense of urgency, a need, a hunger, to be heard and understood. And I was stunned. For many in the group had become aware of their own feelings, a rare thing in the moderate to late stages of Alzheimer’s.

Finally, a 92-year-old woman shakily stood up and solemnly said: “Well, let’s make the decision, that this day is beautiful.”

A man nodded and said: “She’s older than we are, we should listen to her. Besides, she’s the teacher in our class.” 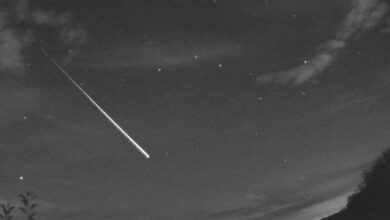 Fireball in night sky likely to have been space junk

Kids released by ICE could be separated from parents on Friday