A series of startling photos have captured what really happens when a toilet is flushed with the seat lid still up.

Harpic, the chemical company, used high-speed specialist cameras to capture the firework display of aerosol particles spewed into the air by a toilet’s sloshing water.

The striking visuals add to a growing movement to encourage people to put the lid down before flushing. A July study found coronavirus particles can be sprayed in a cloud up to three foot high by a single flush.

A survey of 2,000 Britons found 55 per cent of UK adults don’t close the lid when flushing the toilet – despite almost three quarters (72 per cent) saying they are more hygiene aware than ever before.

The coronavirus is hardy and can survive a trip through a human’s digestive system. It is often still present in faeces weeks after symptoms have stopped.

A research and development associate at Harpic, said: ‘There has never been a more important time to take extra care around our homes, although the risks associated with germ spread in unhygienic bathrooms are high, the solution to keeping them clean is simple.

‘As experts in hygiene, Harpic are on hand to help everyone stay safe at home.

‘We hope our new #CloseTheLid campaign helps inspire people to make simple changes to their cleaning routine that can have long-lasting benefits to the health of the nation.’

Some of the particles produced by a flushing toilet are capable of reaching the lower respiratory tract, which can lead to infection.

If a person touches a surface contaminated by the toilet bowl flush, they can then become infected when they touch the nose or mouth.

When asked why they do not close the lid when flushing the toilet, the top reasons from respondents include being unaware of the risks of not flushing (47 per cent), feeling afraid to touch the lid (24 per cent) and general forgetfulness (15 per cent).

However, almost all of the 2,000 respondents (95 per cent) admitted they will start to close the lid after being made aware of the risks.

The research commissioned by Harpic revealed Brits are already taking important steps in ramping up their cleaning efforts.

Cleaning the toilet bowl (49 per cent), deep cleaning the bathroom more frequently (45 per cent) and mopping the floor (44 per cent) are the top things the nation has started doing more of over the last six months.

Previous research has found SARS-CoV-2, the virus which causes COVID-19, can be transmitted via faecal particles.

A study published in June in the Lancet identified virus particles in the excrement of COVID-19 patients nearly 5 weeks after the patients tested negative.

These particles were still viable and could cause faecal-oral transmission of the coronavirus, the researchers warned.

Despite this, the general public is less aware of this potential route of transmission than they are other methods of infection. 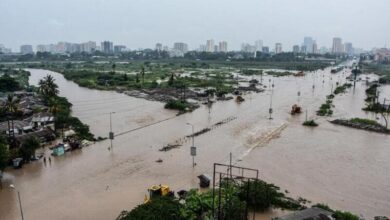 Slum Dwellers in Tanzania Use Drones to Map Flood Risk Dubai to Celebrate Diwali on Metaverse

Don’t You Dare Compare The Soviets to The Nazis!