Saudi Arabia has a strong relationship with the US and is working to counter Iranian escalation to avoid a regional war, said Saudi Arabia’s Deputy Minister of Defense Prince Khalid bin Salman in a wide-ranging interview, obtained in full by Al Arabiya English, in which he also discussed Yemen and Lebanon.

“The Saudi-US relationship is strong and it has been strong for seven decades,” said Prince Khalid who also pointed to the importance of US President Donald Trump’s visit to Saudi Arabia and cooperation on counterterrorism in the region.

In contrast to Saudi Arabia’s “forward-moving vision,” epitomized by the Vision 2030 reform plan, Iran is working to destabilize the region, said Prince Khalid in an interview with VICE media channel conducted on July 27, 2018.

“We have Vision 2030, they have vision 1979,” he said, referring to the 1979 Islamic Revolution in Iran which led to the establishment of the current regime.

“Iran wants to export the revolution. Iran has an expansionist ideology. Iran wants other states in the region not to be partners, but to be under the Iranian expansionist project,” added Prince Khalid.

“We have Vision 2030 that is moving us forward, and they have vision 1979 that is trying to move the region and Saudi Arabia backward,” says Saudi Deputy Minister of Defense Prince Khalid bin Salman, referring to Iran.https://english.alarabiya.net/en/News/gulf/2020/01/24/We-must-pressure-Iran-to-avoid-bigger-conflict-Prince-Khalid-bin-Salman.html … 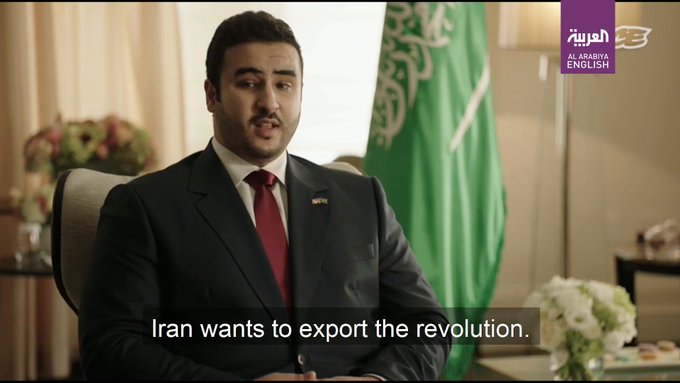 One way in which Iran has promoted its malign influence is through terrorism, said Prince Khalid, who said the Iranian regime and its proxies, and ISIS and al-Qaeda, were the two main terrorist threats to the region and “two sides of the same coin.”

Prince Khalid was also asked about Saudi Arabia and Iran’s respective role in Lebanon and Yemen.

When asked about the conflict in Yemen, Prince Khalid said that Saudi Arabia had become involved to end the war, which he said was started when the Houthis moved south and started “killing and slaughtering the Yemeni people and threatening the central government of Yemen.”

Prince Khalid added that Saudi Arabia remained committed to a political solution to the conflict in line with UN Security Council resolution 2216, which calls for the UN-recognized government to reestablish control over the country.

“[The Houthis] need to choose between being an Iranian militia in Yemen, another Hezbollah in Yemen, launching ballistic missiles and having heavy weapons, or being a political party in Yemen. We want them to be part of Yemen, not part of Iran,” he said.