In a webinar, “Lebanon’s unprecedented crisis: Challenges and paths forward,” hosted by Al Arabiya English, Alia Moubayed, Ziad Abdel Samad, Nasser Yassin and Albert Kostanian met to discuss Lebanon’s challenges and what lies on the path ahead for the slowly unraveling state.

Moubayed, managing director at Jefferies, an American multinational independent investment bank and financial services company, noted the complicated geopolitical environment in which Lebanon must operate, and acknowledged that the country faces concurrent debt, balance of payments and banking crises.v

“You have the symptoms of a full-blown crisis,” she said.

The crisis could continue to deepen she said as the country’s ruling elite are yet to take any concrete policy action to agree on a diagnosis of the country’s problems or a path toward a solution. They also have yet to define a strategy for negotiating with the International Monetary Fund and ensure that those in charge of reform will be able to do so.

Lebanon is currently in negotiations with the IMF for financial assistance. The government passed an economic reform plan in a bid to receive $10 billion from the IMF with an eye also to unlock $11 billion made available in soft loans at the 2018 Paris CEDRE conference on condition of reforms that are yet to materialize. 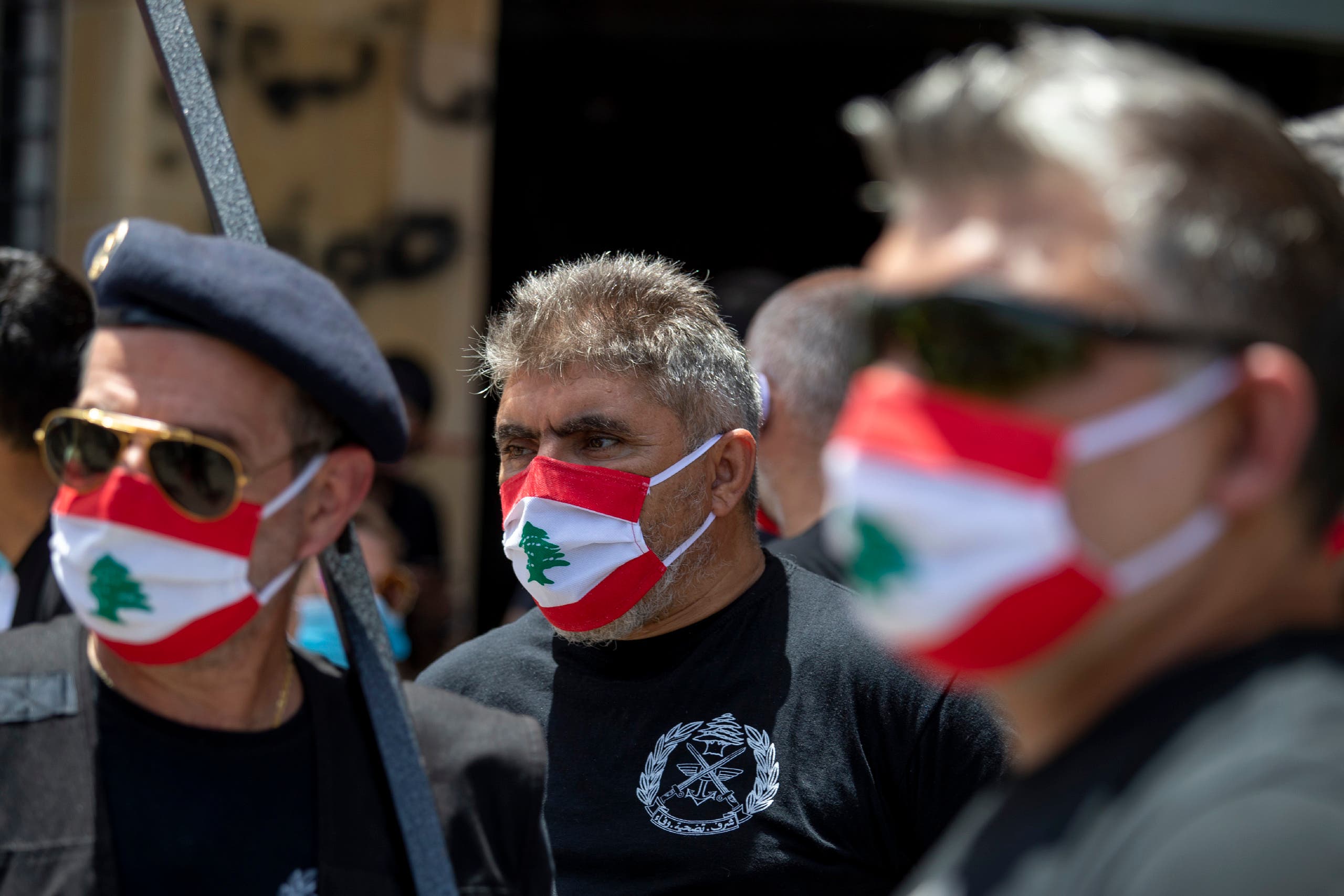 Anti-government protesters wear masks with the colors of the Lebanese flag in Beirut on May 18, 2020. (AP)

Samad, who is the co-founder and executive director of the Beirut-based Arab NGO Network for Development, said Lebanon approached the IMF only as a last resort, but the way negotiations have gone so far with the IMF raises questions about the level of political will in the country.

Referencing the 2018 conference, he said “It was clear the reforms that were suggested, and now we’re witnessing the same plan… This raises real doubts about the political will.”

“They’re directly ignoring the political and social issues and focusing only on the economic [issues],” he said.

While Lebanon slides closer to a point of no return, Yassin, the interim director at the American University of Beirut’s Issam Fares Institute for Public Policy and International Affairs, said Lebanon is experiencing a “low-intensity collapse.”

“[The political elite are] going to adapt to this and make us adapt; they are going to continue to gather what they can from the collapsing state,” he said.

For decades, Lebanon has suffered from chronic mismanagement of state funds that has led to a broad gap between the wealthy ruling elite and the poor at the bottom of society.

For Yassin, donors aren’t going to save Lebanon, but they’ll “ease the collapse.”

Lebanon’s political bedrock is shaky, built on a sectarian power-sharing system that has contributed to years of looting and redistribution that has finally caught up with the country.

“This system was built around a system of a central state where warlords give back to their people,” said Albert Kostanian, television host and content producer for Lebanon’s LBCI “Vision 2030” program.

For Kostanian, what Lebanon faces is a meltdown of the current system predicated on three myths, the first is that the country can function alone through a strong private sector in the absence of a viable public sector.

“There’s not really a single sector that functions,” Kostanian said, referring to the electricity, telecom, transportation and waste management sectors.

The second myth is that of Lebanon as a service economy.

“We don’t produce anything,” he said. “We just sell banking… to other Arab states.”

Lebanon for a long time attracted banking deposits from other Arab states. Those deposits drying up in part helped spur the acute economic pain felt now in the country. He noted there is a large gap between the potential of the local agriculture sector and what it currently produces.

The third myth he said, is that the country can live with such a wide income gap that won’t pose a threat to societal continuity.

“But this has been proven wrong, because people are angry and there’s no fiscal policy, no redistribution, no access to public goods, like schools or hospitals,” he said. “The whole system has fallen apart, and it will be a slow disintegration.”

“We can’t ignore that because there is no sovereignty,” he said. “This problem completely hinders the future of Lebanon and the prospect for

The US, and most recently Germany, has designated Hezbollah as a foreign terrorist organization, and many fear the group’s presence in the country will hinder Lebanon’s ability to attract foreign aid.

With talks ongoing with the IMF and no clear signs yet of political will to make painful structural reforms, the country is at a tipping point.

“Lebanese are resilient, and they always find a way to emerge from crisis, but this time will be pretty tough,” he concluded.

Ilhan Omar wins re-election to US House of Representatives