The Biden administration on Friday again signaled US support for the European Union and Lithuania against China, which is accused of blocking Lithuanian exports in protest over the Baltic country’s diplomatic ties with Taiwan.

US Trade Representative Katherine Tai today spoke with European Commission Executive Vice President Valdis Dombrovskis “and expressed the United States’ strong support for the EU and for Lithuania in the face of economic coercion from the People’s Republic of China (PRC),” a statement from Tai’s office said.

Lithuania, one of the smallest countries in the European Union, made waves in July when it allowed Taiwan to open a diplomatic outpost in Vilnius.

The move outraged Beijing, which does not recognize Taiwan as a state and considers the island a rebellious territory of the mainland.

China began to limit its diplomatic and economic ties with Lithuania in retaliation.

“Ambassador Tai emphasized the importance of working with the European Union and its member states to address coercive diplomatic and economic behavior through various avenues, including the US-EU Trade and Technology Council,” Tai’s office said. 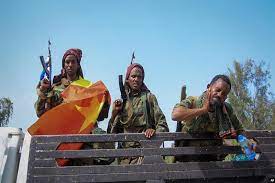