Bama Sivakumar was 34 when she lost her husband to Sri Lanka’s war against the Liberation Tamil Tigers Eelam (LTTE) in April 2009.

“I have not seen his dead body,” she said. “How can I say he is dead? I need a certificate for formalities.”

She has three children to care for and sells betel leaf to make a living, even as she anxiously waits for a government letter certifying her husband has been missing for more than a decade.

“With that letter, I’ll get an allowance of LKR150 ($0.82) a month from the government, but that alone is insufficient to maintain my family,” said Sivakumar, who lives in the northern town of Kilinochchi.

In the aftermath of the war — which liberated northern Sri Lanka from Tamil rebels — activists claim that 50,000 went missing and 89,000 women became widows in the northern and eastern provinces. Most of them were displaced from their ancestral homes because of the ethnic conflict, and their problems remain unresolved a decade on.
“There are 2,750 displaced Muslim families spread out in various parts of the island, our original lands have been either occupied by the security forces or occupied by squatters in Jaffna,” Abdul Sufiyan, coordinator of the re-settlement scheme, said.

He said it was the responsibility of the government to buy them land so they could settle down in their native place.

Shreen Abdul Saroor, a human rights activist who returned from Geneva following the 43rd session of the UN Human Rights Council, said the demands needed to be heard in order to “dismantle the structures of oppression and violence” that had left people vulnerable.

“This means a commitment to disarmament, demilitarization, war crimes accountability, human rights and dignity, livelihood assistance, land rights, cultural rights, inheritance and divorce reforms, and lasting efforts to repair war-torn societies to a place perhaps better than before,” she said.

She said the women who had lost their husbands, fathers and brothers during the conflict, had become their families’ breadwinners.
“These women were comfortably working in traditional professions, but now the government has been pushing them to work in a new environment such as in factories built in their own native places.”

One expert said the government had turned a blind eye to their cause.
“It is the responsibility of the Sri Lankan government to create a mechanism to look after the welfare of war widows,” international lobbyist and human rights activist Muheed Jeeran said. “War widows are wives of the dead soldiers or the rebel fighters.”

Almost 100,000 Muslims from the north were chased out of Jaffna and Mannar by the LTTE in the northern province during the conflict. Most have settled in Puttalam, in the north-western part of the island, while half have returned to their own land in Jaffna.

The president of the Muslim Council of Sri Lanka, N. M. Ameen, said more than 20,000 Muslims were chased out by the LTTE from a village called Chilawathurai in Mannar, which is still occupied by the navy.

Polish Activists on Trial For Picturing The Virgin Mary, Baby Jesus as LGBT-Affiliates 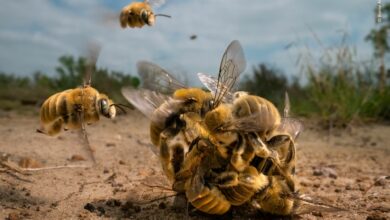 Weather, wildlife and wonder: Your pictures of 2022

Over 6,000 Say Jeff Bezos Should be Denied Re-Entry to Earth!