A man stands in the street with his hands stretched angrily in the air.

Other men surround him in groups, also gesticulating in fervor, some wearing the Algerian flag with its unmissable red star.

The black and white picture by Algerian photographer Fethi Sahraoui captures the Algerian Hirak protesters who took to the street in February 2019 demanding the immediate resignation of Abdelaziz Bouteflika. Sahraoui’s photograph encapsulates a historical moment in Algeria’s road towards political transformation. 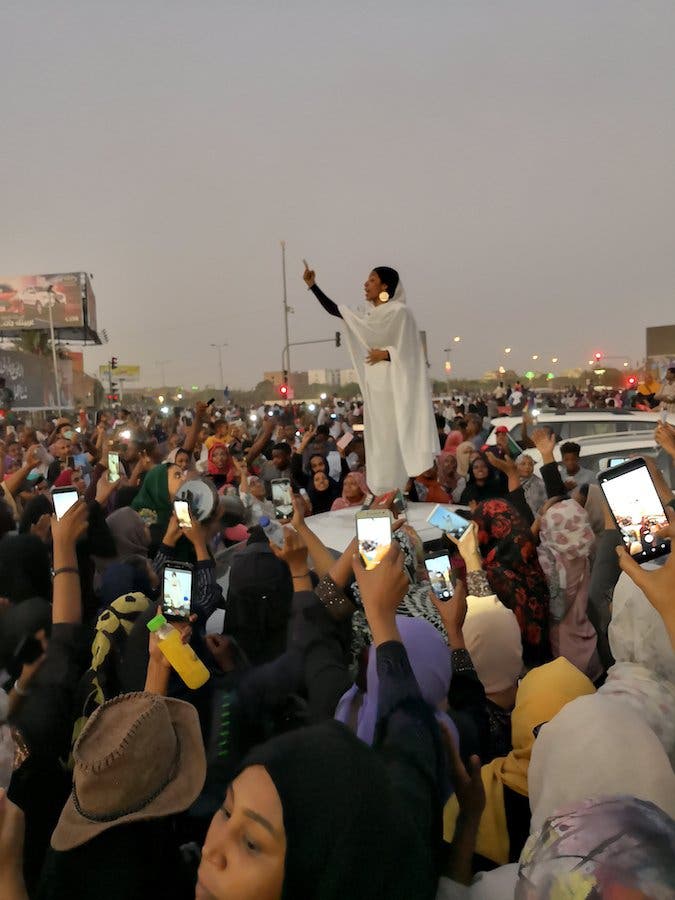 Lana Haroun – from ‘All What I Want is Life’ (Twitter)

“As an Algerian citizen, even before I became a photographer, I developed a special connection with the protests,” Sahraoui told Arab News from Algiers. “Then I started working on taking pictures. It was my way to document what was happening around me. I came from a generation that has been betrayed by our politicians and for many years people in Algeria avoided (talking about) politics but now the youth are managing to orchestrate a movement for change.”

In “All I Want Is Life,” a recent exhibition at Gulf Photo Plus in Dubai’s Alserkal Avenue, works by photographers around the Middle East showcased scenes from the region’s wave of recent protests. The title was inspired by one of the many graffitied messages onto the walls of war- ravaged Baghdad — All I Want Is Life — in one of the sites where protests there are held. The message is one that reveals the common emotions and desires for change that bind all protesters as well as photographers documenting such movements for change in the exhibition.

On view are images and videos capturing recent protests in Lebanon, Iraq, Algeria and Sudan. Their power lies in their ability to create a legacy of these times of change and to preserve the ethos of the protest movement.

“The protests in the Arab world that kicked off in 2019 arose from a complex set of circumstances and legacies; that nuance is often lost in a Facebook post or newspaper article or tweet,” said Mohamed Somji, photographer and founder of Gulf Photo Plus. “Our exhibition was aimed at presenting a variety of visual perspectives by photographers from these cities that we hope offers a more well-rounded and complex narrative than what is offered in the mainstream media.”

The year 2019 saw protest movements around the Middle East that demanded a change in current political regimes. These cries from citizens sought to end years of corruption, economic inequality and the disruptive politics of division and exclusion. Nearly all of these movements have continued well into 2020. Total and long-lasting change has yet to come.

“Covering the protests felt like a duty to me even if at first I was hesitant,” added Sahraoui. “Algeria went through a bloody civil war during the 1990s and I was born in the middle of the nineties. I grew up during the civil war and trauma was all around us. At the start of the protests we were afraid that they might become violent. But they didn’t. They were peaceful but this didn’t attract Western media. They were interested to cover the protests only in the beginning but when they were largely peaceful, with no violence or political clashes, they did not get any more international attention.”

Iraqi photographer Amir Hazim has been covering the protests in Baghdad since October 2019 when protesters took to public areas such as Tahrir Square voicing their need for change and grievances against the Iraqi government. Hazim would hear the embattled cries of people yelling, demanding to have a new life after years of corruption, unemployment and poverty.

“Partaking in the protests and documenting them with my photographs has been one of the most life-changing events for me,” said Hazim, 23. “It was new for me and my generation to go to protest against our government. It was thrilling but also dangerous. It’s a choice you make from the first day you decide to go and photograph the people.”

Hazim said that the act of taking pictures of the protests offers “visual statements” and is itself a form of protest. “These photographs made me feel more connected to my community,” he told Arab News. “You see firsthand the suffering and hear the need for change.”

Taking pictures during a protest with dozens of people around the risk of violence at any moment is not easy.

“I had to adjust my camera so fast to capture those moments; I definitely wasn’t in my comfort zone,” he added. “It was also the first time that I had used the camera that I bought after my graduation in the protests. I want the faces and the feelings of the protesters to be remembered in history.”

Sudanese Musician and photographer Lana Haroun captured what has become known as Sudan’s ‘Nubian Queen’ protester. The woman is 23-year-old Alaa Saleh, an engineering student from the Sudan’s capital of Khartoum who Haroun shot as she stood atop the roof of a car clad in white with her right hand raised over head with one outstretched finger pointing above demanding change.

“She was calling for change,” Haroun told Arab News recalling how she quickly took out her phone on 8 April 2019 and shot Saleh’s picture. Within hours it was trending on social media and became the defining image of almost four months of street protests against the authoritarian rule of President Omar Al-Bashir.  A few days later, on April 11, 2019, Bashir was ousted.

“I wanted to portray the real picture of what was happening in these protests and get away from the fake news in the country,” said Haroun. “Without photographs and videos no one will know the truth.”

Haroun tells how many felt afraid to go to the protests. “Some people died but sometimes you have to sacrifice for the life you want to live,” she adds.

In 1999, renowned Palestinian intellectual Edwards Said decried what he called the “disorganized” state of Arab collective memories. There was a lack of documentation and record-keeping. But today the Middle East, particularly through the voices of its youth, have turned a page. At the end of one of the most eventful decades in the region’s history the common citizen is taking his destiny into his or her own hands. They want to write their own future and these artists have given their voices a place in history.