A heart-wrenching video shows the moment a Tennessee firefighter reunites a dog with his beloved owner just moments after a fire destroyed their home, killing the bulk of the family’s other pets.

Video from the Chattanooga Fire Department captured the moment the dog was brought back to the Tennessee man after the animal was revived by firefighters.

As the firefighter approaches the dog owner, he breaks down in tears and reaches out to his remaining pooch.

The fire happened at around 1.32pm Thursday on the 4000 block of Alabama Ave, with responding firefighters putting out the blaze roughly 10 minutes after arriving on the scene.

Firefighters quickly determined that the family that lived in the home was safe outside of the residence, the department said in a press release.

When an additional search of the home was conducted, firefighters discovered that there were several cats, dogs and birds in the home that died.

It was after that search that the dog was revived and reunited with their owner.

Officials with the fire department estimate that roughly 60 percent of the home was a total loss.

It is unknown if the dog had any serious injuries. 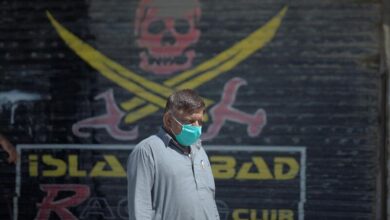