Chinese pet owners who are in home quarantine have started to ‘walk’ their dogs from their balconies using super long leads during the coronavirus outbreak, according to reports.

Trending videos show residents standing by their windows while holding onto their pooches which are attached to lengthy leashes. They take the animals home by pulling the ropes.

While some internet users regarded the clips ‘funny’, most people warned that method is ‘dangerous’ and ‘cruel’.

State media urged the country’s citizens not to copy the practice in a social media post that shared the footage.

The trending topic began yesterday on Weibo, the Chinese equivalent to Twitter, when one video of a resident walking their dog in this way went viral.

The video, filmed in the north-eastern city of Qiqihar on Sunday, shows a dog standing in a patch of green while being bound to a long rope, which its owner is holding from the first floor.

The clip then shows the person hauling up the animal by tugging the rope.

The resident was able to ‘walk’ the dog like this because the pet was small and the flat was not too high, according to a post by state media Global Times, citing Beijing Youth Daily.

The publication billed the dog-walking method as the ‘kite-flying style’.

Some people considered the clip ‘funny’, such as one Weibo user who said: ‘I am laughing too much. Only those living on the first floor could do this.’

However, the majority of viewers criticised the pet owner’s behaviour, saying it was ‘dangerous’, ‘abusive’ and ‘irresponsible’.

One such person queried: ‘Is this to walk the dog or abuse the dog?’

Another condemned: ‘Don’t you know that dogs are afraid of heights?’

A third comment read: ‘It is not funny at all. I really worried that the dog might fall.’

A separate video shared by state newspaper People’s Daily shows another resident using the same method to walk her dog.

The woman is seen standing on her first-floor balcony while controlling her dog which is standing on a street in front of a pet shop. Shen then drags the pet up with the home-made harness.

People’s Daily did not explain when or where the video was shot, but it warned its readers not to copy the act.

Such method appeared as early as March last year, according to a post from an entertainment blogger on Weibo.

Chinese pet owners are flocking to buy face masks for their dogs amid the coronavirus outbreak to prevent their pooches from catching the virus.

There is no evidence to show that the strain of virus which has killed at least 2,012 can be passed onto pets, according to the World Health Organization.

One Beijing-based online seller told MailOnline late last month that he was selling 10 times the number of special masks for dogs every day than before.

‘Most [dogs] have started to wear [masks]. Because there is this virus, people pay more attention to their health and their pets’ health,’ according to 33-year-old Zhou Tianxiao who sells the merchandise at the price of 49 yuan (£5.4) for a pack of three.

In another extremely worrying trend, communities around China have banned the locals from letting their leave their home out of fears that animals could spread the coronavirus.

Community officers have also been caught on camera clubbing pets or stray animals to death in front of horrified residents during their so-called counter-coronavirus campaigns.

Abandonment of pets were also observed in many parts of the country.

Chinese authorities are now trying desperately to stop people from throwing away their pets.

According to the World Health Organization, no evidence has suggested that cats and dogs could also catch the coronavirus.

In a message posted on Weibo, the Chinese equivalent to Twitter, the group advised people to wash their hands after holding their pets to reduce the risks of catching bacteria from the animals.

Animal welfare organisation Humane Society International said: ‘The advice by the World Health Organisation that there is no evidence dogs and cats can be infected with the virus, needs to be heard throughout China.’ 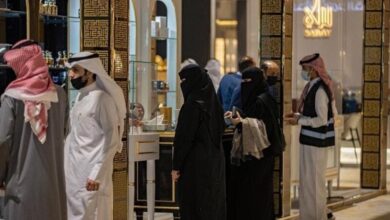 ‘Beitna’: The First TikTok House in The Middle East is based in Amman