The reality television star, 40, was spotted partying with the fashion designer at the grand opening event for The Goodtime Hotel in Miami on Friday.

‘Happy Birthday @victoriabeckham Love you!!!,’ Kim captioned a snap of the two on her Instagram Stories.

She added a pop of color with a pair of bright orange stilettos to give the outfit a touch of Miami spice.

Victoria’s striking features didn’t look a day older than her time with the Spice Girls two decades ago.

Her makeup was perfectly done and her short brown waves hung lightly on her shoulders, and she finished the look with a necklace and earrings. 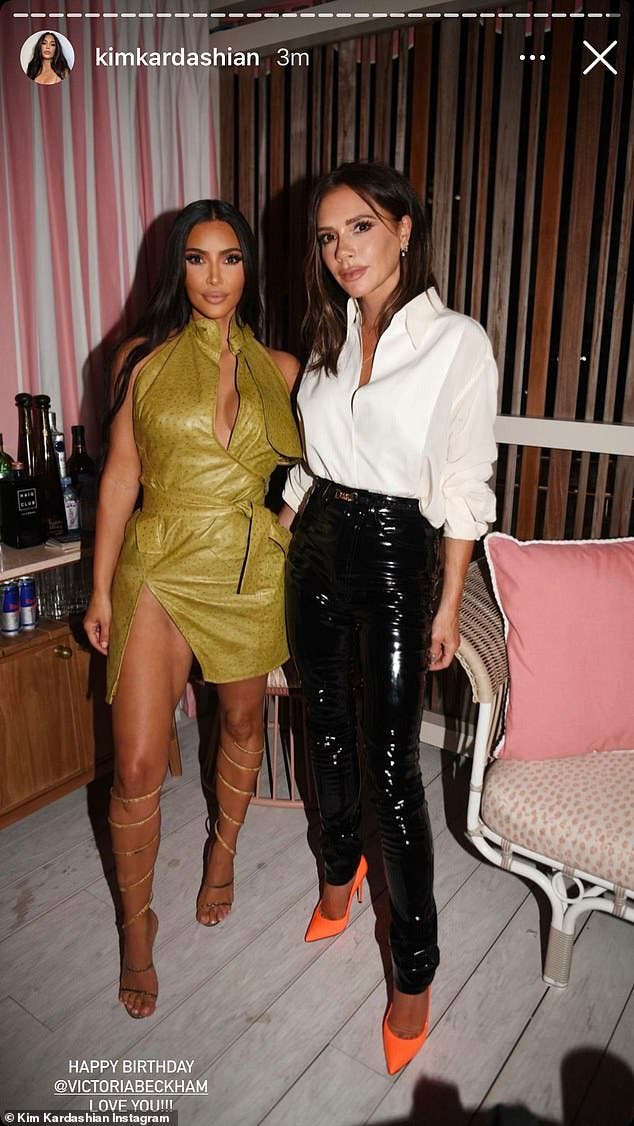 Kim, meanwhile, slid her iconic hourglass frame into a glimmering golden peekaboo dress that showed off her cleavage for the star-studded event.

Her outfit featured a fashionable turtleneck as well as a slit up the hem enabling her to emphasize her shapely legs.

Letting her luxurious dark locks down, she could be seen balancing expertly on a pair of sky-high stilettos with straps winding up almost to the knee.

The Latin heartthrob showed off his toned abs in an unbuttoned black and white striped suit, letting his white Calvin Klein underwear peek over his sun-kissed hips.

The fete served as a joint celebration of the season opener of David Beckham’s Inter Miami CF.

The Beckhams spent time at the event laying back, relaxing and taking in the good time in a VIP cabana.

Kim, on the other hand, hung out behind the DJ booth with friends Jonathan Cheban and Stephanie Shepherd as Alesso gave a surprise performance.

Bad Bunny, Sean Penn, Chris Rock, Vanessa Hudgens, Rick Ross, Anitta and Future were among the other party-goers enjoying a night under the stars on the hotel’s pool deck.

Hudgens, 32, wore a sleek black dress to the event, and its top portion clung tightly to her curvy frame.

The clothing article’s midsection remained partially visible and was held together by two small lengths of rope, and its bottom draped over her sculpted legs.

Pharrell, 48, showed up in a shiny black button-up jacket that featured white lining that ran up and around the Happy singer’s neck.

The multitalented performer paired his top with a pair of dark gray jeans that featured multiple graphics running up and down his pant legs.

To close out the night, Grutman and Williams were presented with keys to both the City of Miami by Mayor Francis Suarez and Miami Beach by Mayor Dan Gelber.

He Acted in Self-Defense! Trey Songz Gets Arrested (Video)

Eva Mendes to Return to Hollywood?