Dubai is turning to two of its most trusted officials to steer its key companies through a drawn-out slowdown, a decade after they helped pull the business hub back from the brink of default.

Mohammed Al Shaibani, director general of the ruler’s court and head of Investment Corp. of Dubai — the emirate’s main investment arm — was named as chairman of palm-shaped island developer Nakheel PJSC, which was at the center of the debt crisis in 2009.

The old guard is back as Dubai looks set to endure another year of falling property prices, weak demand and a retail sector that’s struggling. The emirate also faces the prospect of restructuring a chunk of $23 billion loans to government-related companies for a second time. Many of the city’s hopes rest on hosting the World Expo 2020 exhibition later this year, which is expected to spur economic growth to about 3.2 percent, after expanding just 2.1 percent in 2019.

“Today, we see the trusted hands from a decade ago at the helm again, said Ahmad Alanani, chief executive officer of Sancta Capital, a Dubai-based alternative investor focused on special situations in the region. “Dubai has been suffering from a white collar recession since 2014 and has struggled to maintain its competitive place as its oil dependent neighbors tightened their purses and the cost of doing business soared.

The appointments should help “rationalize supply in the property market by centralizing decision making between state-controlled developers, Alanani said.

Al Shaibani and Sheikh Ahmed both played key roles to revive the emirate when state-owned Dubai World restructured $23.5 billion of debt and Nakheel had $10.5 billion of unpaid bills. Sheikh Ahmed, best known as the chairman of Emirates airline, became the head of the supreme fiscal committee that oversaw Dubai Inc.’s debt restructuring, while Al Shaibani, a non-royal technocrat, became the committee’s vice chairman.

Ten years on, Dubai is again looking at ways to revive its economy after a short-lived reprieve in 2014. The city’s real estate market and a property glut remain central to concerns, prompting Hussain Sajwani, chairman of Damac Properties PJSC, to warn that continued oversupply could be a “disaster for the city state.

Al Shaibani and Sheikh Ahmed’s appointments are the latest in a number of steps to prevent the ongoing property slump from turning into a crisis.

Ruler Sheikh Mohammed bin Rashid Al Maktoum created a committee, headed by his son, to balance out supply and demand, and ensure that state-owned developers don’t crowd out private builders. The emirate is also introducing a number of measures to make it easier for foreigners to visit and stay in the city.

Some of these efforts are paying off. Dubai is still attracting visitors, recording an all-time high of almost 17 million overnight stays last year.

“Bringing in these guys should be taken as a sign that the government means business, said Christopher Payne, a former chief economist at the Dubai International Financial Centre and now at Peninsula Real Estate. “We know that the government is trying to get to grips with the oversupply, maybe this could be part of that effort. 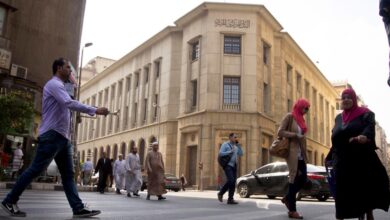