The United States will require all airline passengers arriving from the United Kingdom to test negative for COVID-19 within 72 hours of departure amid concerns about a new coronavirus variant that may be more transmissible.

The Centers for Disease Control and Prevention (CDC) said in a statement late on Thursday that all airline passengers arriving from the UK must test negative in order to fly to the US, starting on Monday.

The decision was a turnaround after the Trump administration told US airlines on Tuesday it was not planning to require any testing for arriving UK passengers. The move follows the emergence of a highly infectious new coronavirus variant in Britain that has prompted many countries to shut their borders to travellers from there.

Some US airlines already require a negative COVID-19 test.

On Monday, the three airlines that fly from London to JFK – Delta, British Airways and Virgin Atlantic – agreed to a request from New York Governor Andrew Cuomo that they screen passengers from Britain.

And earlier on Thursday, United Airlines and Delta Airlines said it was requiring all passengers on flights from the UK to the US to present a negative COVID-19 test taken within 72 hours of departure.

Delta’s policy, expanded from its decision on Monday to require the screenings on UK flights to New York’s JFK Airport, is effective December 24, while United’s requirement begins on December 28.

The CDC, in its statement, said that passengers from the UK can take either a PCR or antigen test.

The CDC said “viruses constantly change through mutation and preliminary analysis in the UK suggests that this new variant may be up to 70 percent more transmissible than previously circulating variants”.

Under the new policy, passengers departing from the UK for the US must provide written documentation of their laboratory test result to the airline, the CDC said. Airlines must confirm negative test results for all passengers before they board.

If passengers choose not to take a test, the airline must deny boarding.

The CDC said the order will be signed on Friday and is effective from Monday.

News of the new strain, which scientists said was up to 70 percent more transmissible, has prompted alarm across the globe.

China also suspended direct flights to and from the UK indefinitely on Thursday. It had barred non-Chinese travellers from the UK last month, including those with valid visas and residence permits because of rising coronavirus cases.

“After much consideration, China has decided to take reference from other countries and suspend flights to and from UK,” Wang Wenbin, a foreign ministry spokesman, said at a daily briefing. 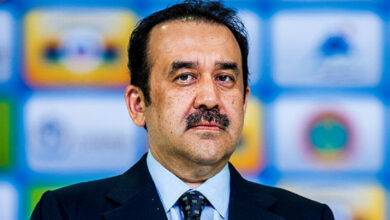 Kyiv warns EU against ‘trap’ of loosening sanctions against Russia Russia’s attacks on civilians ‘appalling acts,’ must be probed as war crimes: UK