The US Commerce Department will on Friday move to effectively ground 100 airplanes that have recently flown to Russia and are believed to violate US export controls, including a plane used by Russian businessman Roman Abramovich, officials told Reuters.

The Commerce Department will warn companies and other entities around the world that any refueling, maintenance, repair, or spare parts or services violate US export controls and subject companies to US enforcement actions that could include “substantial jail time, fines, loss of export privileges, or other restrictions,” the department said.

The department said in a statement the action means “international flights from Russia on these aircraft are effectively grounded.”

US Commerce Secretary Gina Raimando said in a statement to Reuters the department is “publishing this list to put the world on notice—we will not allow Russian and Belarusian companies and oligarchs to travel with impunity in violation of our laws.”

The United States, Canada and much of Europe have barred Russian planes from flying over their airspace, which has forced the cancellation of much of Russia’s international flights.

The rules apply to any US manufactured aircraft or any with more than 25% US-origin controlled content that were re-exported to Russia after the new stringent controls on aviation-related items for Russia took effect on Feb. 24.

Deputy Commerce Secretary Don Graves said in a statement the series of US actions “have isolated Russia and Belarus from the global economy, and I hope that today’s action brings that fact home to the Russian businesses and oligarchs that seek to continue their operations.” 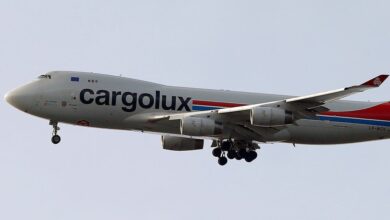