Former United States President Donald Trump’s administration unleashed a torrent of economic sanctions on individuals and entities during his single term in the Oval Office. The punitive measures were aimed at squeezing the US’s foes – most notably Iran, Venezuela and China – to advance Trump’s foreign policy agenda.

But sanctions often failed to achieve their objectives, and critics charge that the acceleration of sanctions on some countries near the end of Trump’s term was designed to box in newly sworn-in President Joe Biden on key foreign policy matters.

The Trump administration’s unilateral withdrawal from the Iran nuclear pact with world powers in 2018 and its subsequent “maximum pressure” campaign of sanctions targeting Iran’s economy failed to coerce Tehran back to the negotiating table. The relentless barrage of blacklistings backfired in some respects because Iran is once again enriching uranium.

Venezuela’s already decimated economy was also hit with successive rounds of US sanctions in an effort to pressure President Nicolas Maduro out of office and usher in Juan Guaido, who Washington recognises as Venezuela’s interim president.

The Trump administration’s sanctions also drew heavy criticism for exacerbating the hardships of civilians, especially as measures continued to be unleashed during the COVID-19 pandemic when nations were struggling to fund their public health response.

Here is a brief but by no means exhaustive summary and timeline of key sanctions on four nations whose economies were targeted on Trump’s watch.

The US reimposed nuclear-related sanctions targeting Iran’s energy sector, including petroleum-related transactions, as well as transactions by foreign financial institutions with the Central Bank of Iran.

Effective November 5, 2018, the sanctions were imposed after the US withdrew from the 2015 Joint Comprehensive Plan of Action (JCPOA), also known as the Iran nuclear deal, in May 2018.

The US Department of the Treasury sanctioned an Iran-based entity, and four people connected to it, for allegedly organising conferences for the country’s Islamic Revolutionary Guard Corps (IRGC) for “efforts to recruit and collect intelligence from foreign attendees, including US persons”.

By means of an executive order, Trump announced sanctions on Iran’s Supreme Leader Ayatollah Ali Khamenei and the Office of the Supreme Leader.

The order added that any individual “appointed by the Supreme Leader” would also be sanctioned.

On the same day, the US Treasury said eight members of the IRGC’s navy, ground forces and aerospace division would also be sanctioned.

The Trump White House imposed sanctions on Iran’s metal and steel industries and some senior leaders, following Tehran’s attack on US two military bases in Iraq – made in retaliation for the US killing of Iranian General Qassem Soleimani.

The sanctions target the nation’s steel industry, as well as eight senior Iranian officials, and other sectors of the economy, including mining, construction, manufacturing and textiles.

In the same month, the Atomic Energy Organization of Iran and its director, Ali Akbar Salehi, were also placed under US sanctions.

The US imposed sanctions on several Iranian authorities, including its interior minister, accusing them of engaging in serious cases of human rights abuses.

It alleged that Interior Minister Abdolreza Rahmani Fazli gave orders authorising the Law Enforcement Force of Iran to use lethal force in response to anti-government protests in November 2019, leading to the killing of protesters, including at least 23 minors.

The US Treasury announced another round of sanctions that effectively shut Iran out of the global financial system.

Eighteen major Iranian banks were blacklisted, including 16 targeted for “operating in Iran’s financial sector”; one for being controlled by a sanctioned Iranian bank; and one for being affiliated with Iran’s military, according to the Treasury. 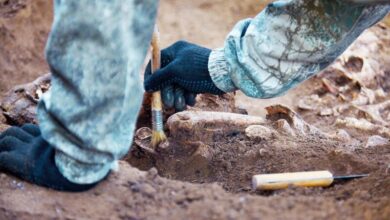