The United States has rejected China’s territorial claims in the South China Sea, drawing an angry response from Beijing, which said Washington was trying to inflame tensions in the disputed waters.

US Secretary of State Mike Pompeo said on Monday there was no legal basis for China’s claims on the Sea and accused Beijing of using intimidatory tactics against other claimant states.

“We are making clear: Beijing’s claims to offshore resources across most of the South China Sea are completely unlawful, as is its campaign of bullying to control them,” Pompeo said in a statement.

“The world will not allow Beijing to treat the South China Sea as its maritime empire.”

In response, the Chinese embassy in the US described the announcement as “completely unjustified” and accused Washington of stoking frictions.

“Under the pretext of preserving stability, (the US) is flexing muscles, stirring up tension and inciting confrontation in the region.”

The relationship between the US and China has become increasingly tense in recent months over the coronavirus pandemic – the US is now the world’s worst-affected country – and over China’s actions in Hong Kong and Xinjiang.

China claims almost all of the South China Sea under its self-proclaimed “nine-dash line”, which would give it about nine-tenths of the 3.5-million square kilometre sea.

Five other governments claim all or part of the sea – the Philippines, Vietnam, Brunei, Malaysia and Taiwan – through which approximately $5 trillion in goods are shipped every year.

Previously, US policy had been to urge a peaceful resolution to the dispute through UN-backed arbitration, but the statement suggests a hardening of Washington’s position.

“America stands with our Southeast Asian allies and partners in protecting their sovereign rights to offshore resources, consistent with their rights and obligations under international law. We stand with the international community in defence of freedom of the seas and respect for sovereignty and reject any push to impose ‘might makes right’ in the South China Sea or the wider region,” Pompeo said. 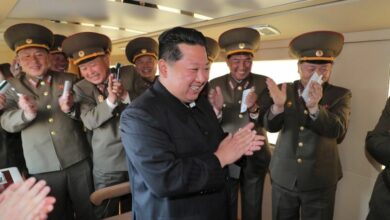 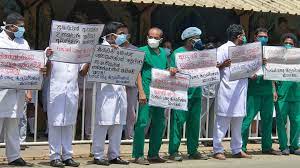