Hundreds of demonstrators have rallied in the US city of Louisville, demanding justice on the anniversary of the death of Breonna Taylor, a 26-year-old Black woman who was shot and killed by police during a botched raid of her apartment.

Taylor’s mother, Tamika Palmer, led the crowds marching on Saturday behind a large purple banner with an illustration of the young woman’s face, chanting “No justice, no peace.”

“We got two different Americas. We got one for Black Americans and one for white Americans,” Benjamin Crump, a lawyer representing Taylor’s family, told the demonstrators.

“We got to get justice for all our people in America.”

Taylor’s death, along with the police killing of George Floyd in Minnesota, sparked huge protests against police abuses and racism across the United States last year. But 12 months after the killing, only one of three police officers involved in the raid has been charged, and only for endangering Taylor’s neighbours by firing wildly into an adjacent apartment.US President Joe Biden on Saturday declared his support for police reforms.

“Breonna Taylor’s death was a tragedy, a blow to her family, her community, and America,” he said in a tweet. “As we continue to mourn her, we must press ahead to pass meaningful police reform in Congress. I remain committed to signing a landmark reform bill into law.”

Walker last year filed a continuing state lawsuit against the city and police, saying he was the victim of assault, battery, false arrest and malicious prosecution.

Taylor’s front door was breached by Louisville officers as part of a drug raid in the early morning hours of March 13, 2020. Walker fired his gun once, saying later that he feared an intruder was entering the apartment. One officer was struck, and he and two other officers fired 32 shots into the apartment, striking Taylor five times.

Taylor’s death initially flew under the media radar, as the COVID-19 crisis shut down society, but Floyd’s death in Minnesota and the release of a chilling 911 call from Walker in late May sparked interest in the case.

A Kentucky judge last week signed an order permanently closing a criminal case against Walker for firing at the officer.

Walker referenced the closure of the case against him during Saturday’s rally.

“I gotta say that’s a nice start, but that’s not where we finish,” Walker said. “We’ve got to keep going.”

A continuing federal investigation could be wide-ranging and is regarded by many as the last chance for justice for Taylor’s death. In a statement on Saturday, the Federal Bureau of Investigation said it has “made significant progress in the investigation” despite the COVID-19 pandemic presenting “several unexpected obstacles”. The Bureau remained “steadfast in its commitment to bringing this investigation to its appropriate conclusion,” the statement said. 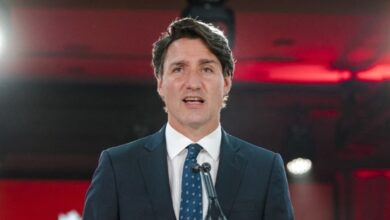 How safe is the US president’s ‘nuclear football’? Pentagon watchdog to find out