Here are the latest updates.

At least 20,000 people have died in care homes in England and Wales as a consequence of the coronavirus pandemic, according to Reuters calculations based on official data.

In the eight weeks to May 1, there were 37,627 people who died in care homes of all causes in England and Wales, according to data from the Office of National Statistics (ONS).

The Canadian coronavirus death toll passed the 5,000 mark and Prime Minister Justin Trudeau said major reforms were needed for seniors’ residences, where more than 80 percent of the victims lived.

The public health agency said the number of deaths edged up by 2.9 percent to 5,049, from 4,906 on Monday, one of the smallest daily gains so far.

The US government is donating “up to 1,000” ventilators to South Africa to help the country respond to COVID-19 as the Trump administration addresses criticism that it hasn’t done enough for countries in need.

“South Africa is the first country in the world to receive this state-of-the-art equipment” from the National Security Council and USAID, the US Embassy said in a tweet.

Last week, however, Mexico said it received a U.S. shipment of 211 ventilators as part of aid promised by President Donald Trump.

18:20 GMT – Germany must help other EU states get back on their feet – Merkel

Germany must help its European Union neighbours revive their economies after the coronavirus crisis, Chancellor Angela Merkel told a meeting of lawmakers from her conservative bloc, according to several participants.

It is essential for Germany, as an export nation, that its EU partners also do well, Merkel told the lawmakers, with a view to consultations on an EU reconstruction programme, both the scale and the financing of which were open, the chancellor said.

The United States reported a record $738 billion budget deficit in April, as an explosion in government spending and a shrinking of revenues amid the novel coronavirus pandemic put it deeply into the red.

The Treasury Department said the budget deficit last month was the first to reflect the enormity of government spending that has been authorized to try to mitigate the economic impact of the crisis, which until recently saw most of the country under strict lockdown orders and many businesses shuttered to contain the spread of the virus.

Trump administration “testing czar”, Admiral Brett Giroir, told the Senate the US could be performing at least 40 million to 50 million tests per month by September.

But that would work out to only between 1.3 million and 1.7 million tests per day.

Harvard researchers say the US must do 900,000 daily tests by this Friday in order to safely reopen.
Giroir is assistant secretary for health at the Department of Health and Human Services. He spoke via video conference at a hearing of the Senate Health, Education, Labor and Pensions committee.

The IMF had approved the funding on Monday to help Egypt to contend with the new coronavirus pandemic that has brought tourism to a standstill and triggered capital flight.

A fish-processing plant in Ghana where more than 500 workers tested positive for the coronavirus has partially reopened, owner Thai Union Group PCL said.

Ghana’s President Nana Akufo-Addo said on Sunday that one worker at the fish factory in the coastal city of Tema had infected 533 other employees.

Local government and trade union officials have confirmed to Reuters news agency that the plant is Pioneer Food Cannery Limited, which is owned by Thai Union, the world’s top producer of canned tuna. 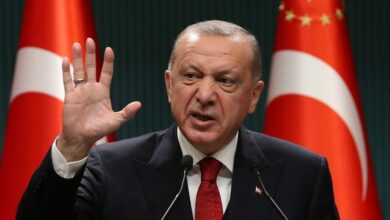