Democrats in the United States Congress are questioning whether the administration of US President Donald Trump is improperly spying on Americans after it was revealed federal agencies used a drone, spy planes and covert techniques to surveil protests.

“We demand that you cease any and all surveilling of Americans engaged in peaceful protests,” a group of 30 senior legislators wrote in a letter to FBI Director Christopher Wray and other top US law enforcement officials.

A litany of domestic surveillance by authorities has emerged in the wake of largely peaceful protests following the death of George Floyd – protests that have been met by police with tear gas, rubber bullets and batons and that have at times turned violent.

US Customs and Border Protection (CBP) deployed a predator drone on May 29 over the city of Minneapolis, where Floyd, a Black man, was killed when a white police officer kneeled on his neck for nearly nine minutes. The FBI used a small plane equipped to collect mobile phone location data over Washington, DC on June 2, according to members of Congress and public reports.

The FBI and US National Guard used a hi-tech RC-26 spy plane with infrared and electro-optical cameras over Washington, DC, and Las Vegas on the same day.

The US Drug Enforcement Administration was authorised to “conduct covert surveillance” of the protests. Attorney General William Barr told state governors the FBI’s network of regional counterterrorism centres would be used to track protesters.

“Americans should not have to take proactive measures to protect themselves from government surveillance before engaging in peaceful demonstration,” members of Congress led by Representatives Anna Eshoo and Bobby Rush said in the letter dated June 9.

The politicians cited the “chilling effect” of the surveillance and demanded the Trump administration “cease surveilling peaceful protests immediately and permanently”.

Trump and other members of his administration have characterised the protests not as constitutionally protected free speech but as criminal acts, going so far as to label events as “domestic terrorism”.

In tweets on Thursday, Trump said “domestic terrorists” and “anarchists” had taken over Seattle after protesters occupied and barricaded neighbourhood streets around an abandoned police precinct near the city’s central business district.

Attorney General Barr said at a news conference on June 4 that US prosecutors were collecting intelligence from “the FBI and multiple different sources” about so-called Antifa and “Boogaloo” violent groups that he said were using the protests to “exacerbate the violence”.

“We categorise those as domestic terrorism investigations and are actively pursuing them through our joint terrorism task forces,” FBI Director Wray said at the news conference.

Talking about protests in Washington, DC at the end of May, the acting head of the CBP said in a tweet: “These protests have devolved into chaos and acts of domestic terrorism by groups of radicals & agitators.” 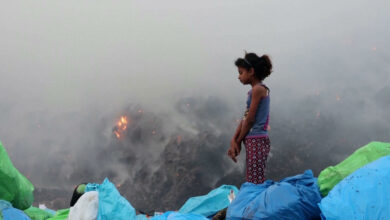