The coronavirus pandemic continues to spread globally placing added burden on health care workers responding to the number of patients infected with the virus.

The efforts of health care workers have not gone unnoticed by communities, government officials and small and big businesses for trying to combat the virus, known as COVID-19.

Donating food to hospitals is one way to show appreciation at such an unprecedented time.

In the U.S. state of Virginia, a local Turkish restaurant owner wants to show his gratitude and provide a morale boost for health workers at Virginia Hospital Center.

“I am aware of their ardent efforts working day and night to fight this disease and wanted to do my part,” said Turgut Yigit, who owns and is chef at the Istanbul Grill restaurant in Arlington.

Yigit, 51, is originally from Hatay province of southern Turkey and has lived in the U.S. and worked for more than 20 years in the food business.

He joined other restaurants across the country donating food to the health care workers and prepared a bag of a meat-wrap, baklava desert and one can of soda.

“Many people want to help, like me and my friends, and this is the only way I can do my part,” said Yigit. “I am doing it to support them during these tough times.”

Istanbul Grill is one of thousands of small businesses that have been affected by the outbreak in the state. It offers takeout and delivery for loyal customers mostly, as do other local restaurants.

“I am badly impacted. Sales are down and there are just a handful of [takeouts]. But that does not mean we should remain indifferent. I believe we will get through this, by the grace of God,” he said.

The 51-year-old has a niece working at a hospital in Turkey and talks with her one or two times in a week. He understands what she is going through as a health worker.

“Influx of patients, burden of work, staying overnight at hospital and being isolated from family members, these are just known things. They badly need the morale,” said Turgut.

Cathy Turner, the Director of Health Promotion at Virginia Hospital Center, told Anadolu Agency hospital staff is “so appreciative” of the support from the community.

“They are working so hard and it is nice to know the community is out there and remembering them and thinking of them. So, we just really appreciate all the support we’ve been given by everyone in our community,” said Turner.

Yigit plans to donate food weekly in line with the hospital’s schedule.

“It is a critical time for everyone to get together and help each other,” he said.

Globally, the virus has infected more than 2 million patients and has claimed some 133,000 lives, according to figures compiled by the U.S.’ Johns Hopkins University. More than half a million people have recovered. 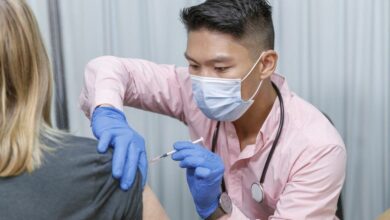 We could know if a vaccine works this month

US CDC reports most common side effects of Pfizer, Moderna coronavirus vaccine

The brain sensor discovery behind humans getting taller