The US government has invited vaccine manufacturers, drug distributors and government officials to a “COVID-19 Vaccine Summit” next week, Stat News reported on Tuesday, citing an invitation obtained by the news organization.

The meeting which is scheduled for December 8 will feature President Donald Trump, Vice President Mike Pence and private-sector executives, the report said.

Meanwhile, Dr. Scott Atlas has resigned as special adviser to President Donald Trump, a White House official said on Monday, after a controversial four months during which he clashed repeatedly with other members of the coronavirus task force.

On Monday, US firm Moderna said it would file requests for emergency authorization of its COVID-19 vaccine in the United States and Europe , after full results confirmed a high efficacy estimated at 94.1 percent.

“We believe that our vaccine will provide a new and powerful tool that may change the course of this pandemic and help prevent severe disease, hospitalizations and death,” said the company’s CEO Stephane Bancel.

If the US Food and Drug Administration agrees it is safe and effective, the first of the drug’s two doses could be injected into the arms of millions of Americans by the middle of December.

Americans returning home from Thanksgiving break faced strict new coronavirus measures around the country Monday as health officials brace for a disastrous worsening of the out-of-control surge because of holiday gatherings over the long weekend.

Los Angeles County imposed a stay-at-home order for its 10 million residents, and Santa Clara County, in the heart of Silicon Valley, banned high school, college and professional sports and decreed a quarantine for those who have traveled more than 150 miles outside the county. 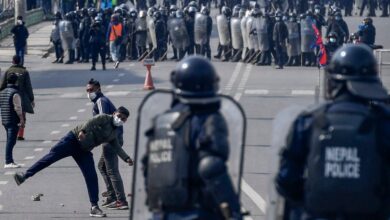 Nepali police clash with protesters opposed to $ 500 mln US grant