A US couple set themselves on fire as they walked down the aisle after getting married in a bizarre show at their wedding ceremony, Newsweek reported.

Wedding exits are usually extravagant send-offs from friends and family, with fireworks, sparklers and flowers.

However, this professionally trained stunt couple, who met on the job, decided to literally set themselves on fire.

Video of the display saw the couple’s rear and the flower bouquet set alight, as a small team stood nearby with fire extinguishers.

“May the fire burn in our hearts for the rest of our lives,” a cheeky caption by Jessop read on Instagram.

Friends and family cheered the calm-seeming couple on from the sidelines, in what can only be described as a never-seen-before wedding function.

Once the exit walk concluded, the duo were extinguished by two men with fire extinguishers in a large, smoky finale.

Some social media users were curious about how the couple managed to keep their hair unscathed from the fire to which event organizer Powell responded: “They both had anti-burn gel in their hair and face, then she had a wig on top,” according to Newsweek.

Commenting on his own video, Powell said: “These are trained professionals, don’t try this at home,” Newsweek reported.

Ex-Vogue Editor: Antwerp is Not Just a Port But a City of Glamour Fashion The Conquest of Istanbul Celebrated With a Visual Feast

World-Famous Madame Tussauds Set to Open its Doors in Dubai

Row in Egypt: Does The Sphinx Represent Prophet Idris? 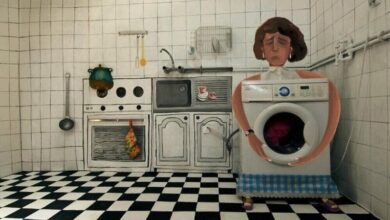