The United States on Friday accused Russian authorities of violating the rights of jailed opposition leader Alexei Navalny by restricting his contact with lawyers and repeatedly subjecting him to solitary confinement.

Navalny, President Vladimir Putin’s most vocal domestic critic, is serving nine years in jail on a series of charges he says are politically motivated.

“The United States is deeply concerned by the Russian Government’s escalating, arbitrary interference with Aleksey Navalny’s rights,” the State Department said in a statement late Friday.

The agency said prison authorities had interfered with Navalny’s access to legal defense by supervising his meetings with his lawyers and delaying exchanges of documents and communication between them.

“This interference, along with his repeated diversion to solitary confinement for minor alleged infractions, is further evidence of politically motivated harassment,” the statement went on.

In recent weeks, the 46-year-old leader jailed near the town of Vladimir some 200 kilometers (125 miles) outside Moscow, has said he was placed in solitary confinement on several occasions as punishment, including for having tried to start a union at the prison where he is jailed.

Describing Navalny’s arrest as “already shameful,” the State Department said Moscow’s “insistence on harassing him further only highlights its insecurity and fear of those who speak the truth.”

Images of the father of two published last week by independent Russian media, show him emaciated and exhausted.

And his aides have raised alarm, saying the new communication procedures prevent them from knowing what is happening with him. 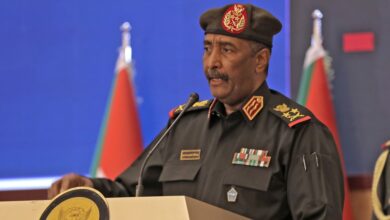