World leaders should declare states of “climate emergency” to spur faster cuts in greenhouse gas emissions, UN Secretary General Antonio Guterres said on Saturday at a summit marking the fifth anniversary of the Paris climate accord.

Dozens of world leaders addressed the one-day virtual gathering, aimed at building momentum for more ambitious national commitments ahead of a pivotal round of climate talks due to take place in Glasgow in late 2021.

“Can anybody still deny that we are facing a dramatic emergency?” Guterres said via video. “That is why today, I call on all leaders worldwide to declare a State of Climate Emergency in their countries until carbon neutrality is reached.”

Guterres said economic recovery packages launched in the wake of the coronavirus pandemic should represent an opportunity to accelerate the transition to a low-carbon future – but said this was not happening fast enough.

“So far, the members of the G20 are spending 50 percent more in their stimulus and rescue packages on sectors linked to fossil fuel production and consumption, than on low-carbon energy,” Guterres said.

“This is unacceptable. The trillions of dollars needed for COVID recovery is money that we are borrowing from future generations,” he said.

On the eve of the summit on Friday, co-host Britain had announced it would end direct government support for overseas fossil fuel projects, aiming to spur similar moves by other countries to accelerate a shift to cleaner energy.

British Prime Minister Boris Johnson told the summit that countries could work together to radically cut dependence on fossil fuels, change agricultural practices, and reverse the process by which for centuries humanity has been quilting the planet in “a toxic teacosy” of greenhouse gasses.

“And at the same time, we can create hundreds of thousands of jobs, millions of jobs, across the planet as we collectively recover from coronavirus,” Johnson said.

China, which in September gave the Paris process a boost with a surprise announcement that it would target net zero carbon emissions by 2060, said it was raising its ambitions for shifting from fossil fuels to renewable energy.

President Xi Jinping announced that China would aim to have more than 1,200 Gigawatts of installed wind and solar capacity by 2030 — more than double the country’s existing capacity.

China’s National Development and Reform Commission, the state planning body, is aiming to have 240 GW of wind and the same amount of solar capacity installed by the end of this year.

“We will take solid steps to implement the targets just announced and contribute even more to tackling the global climate challenge,” Xi said via a video message.

With the impacts of climate change increasingly visible in disasters from wildfires in the US West to melting ice caps, more intense hurricanes, and fast-rising sea levels, campaigners urged leaders to heed calls for emergency action.

“It is the melting of permafrost; forest fires that hit closer to the home of the climate crisis deniers; droughts that ransack living beings of their resources; floods that reminded many of us that we have no escape,” said Selina Neirok Leem, a campaigner from the Marshall Islands. 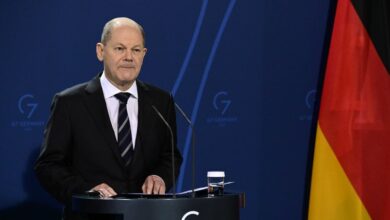