As the United Kingdom’s COVID-19 death toll approaches 100,000, grief-stricken relatives of the dead expressed anger at Prime Minister Boris Johnson’s handling of the worst public health crisis in a century.

When the novel coronavirus, which first emerged in China in 2019, slid silently across the United Kingdom in March, Johnson initially said he was confident it could be sent packing in weeks.

But 97,939 deaths later, the United Kingdom has the world’s fifth worst official death toll – more than its civilian toll in World War Two and twice the number killed in the 1940-41 Blitz bombing campaign, although the total population was lower then.

Behind the numbers there is grief and anger.

Jamie Brown’s 65-year-old father died at the end of March after it was suspected he contracted COVID-19 while travelling on a train into London for work. At the time, the government was mulling a lockdown.

Told by medics to stay at home, he awoke days later with a tight chest, disorientated and nauseous, and was taken to hospital in an ambulance. He died from a cardiac arrest five minutes after arriving.

His son said the virus had damaged his lungs to the point where his heart gave up. He was a month away from retirement.

“For me, it has been terrifying and harrowing to see everything that you hope for taken away. He will never be at my wedding; he will never meet any grandkids,” Brown told Reuters.

“Then, you watch the death toll rising whilst ministers pat themselves on the back and tell you what a good job they have done. It changes very quickly from a personal to a collective grief.”

Some scientists and opposition politicians say Johnson acted too slowly to stop the spread of the virus and then bungled both the government’s strategy and execution of its response.

Johnson has resisted calls for an inquiry into the handling of the crisis and ministers say that while they have not got everything right, they were making decisions at speed and have among the best global vaccination programs.

In a series of investigations, Reuters has reported how the British government made several errors: it was slow to spot the infections arriving, it was late with a lockdown and it continued to discharge infected hospital patients into care homes.

Many of the bereaved are angry and want an immediate public inquiry to learn lessons from the government’s response.

Ranjith Chandrapala died in early May at the same hospital where he took passengers to and from on his bus.

His daughter, Leshie, said the 64-year-old was slim, healthy and had not missed a day of work driving buses in the last 10 years.

She said he was not issued with a face mask – she bought him one herself – and the passengers were not told to wear them.

“The government’s handling of the crisis has been negligent, it is just unforgivable,” she said. “People in power just sent these guys over the line unprotected.”

Chandrapala stopped work on April 24 after developing COVID-19 symptoms. He died in intensive care 10 days later, with his family unable to say goodbye in person.

Early in the pandemic in March, one of England’s most senior doctors told the public that wearing a face mask could increase the risk of infection. The government made face coverings mandatory for passengers in England on June 15. 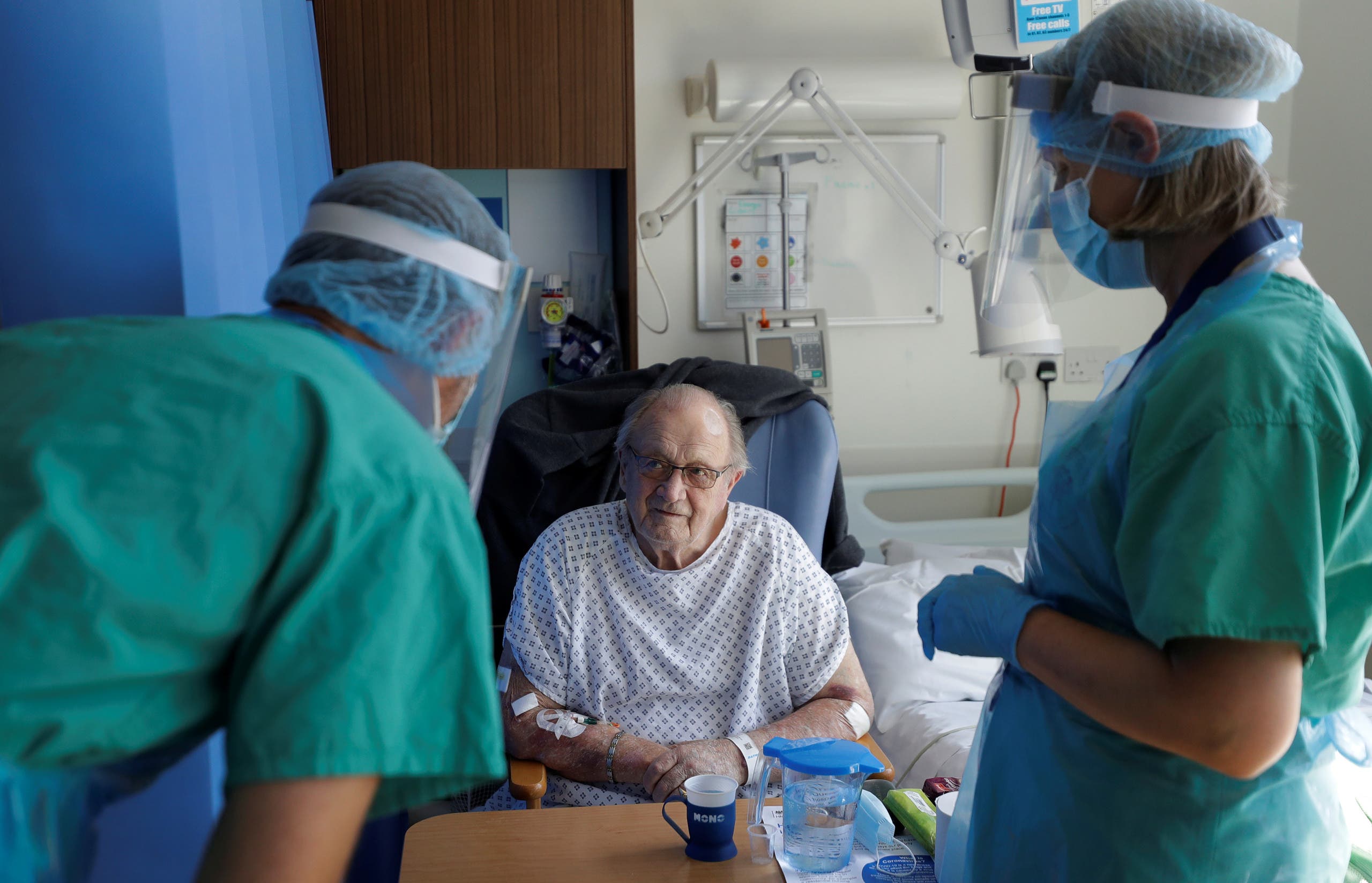 Coronavirus patient George Gilbert, 85 who is part of the TACTIC-R trial, is treated at Addenbrooke’s hospital in Cambridge, Britain. (Reuters)

Nearly 11 months after the United Kingdom recorded its first death, some British hospitals look like a “war zone”, Vallance said, as doctors and nurses battle more infectious variants of the SARS-CoV-2 coronavirus that scientists fear could be more deadly.

On the COVID-19 frontline, patients and medics are fighting for life.

Joy Halliday, a consultant in intensive care and acute medicine at Milton Keynes University Hospital, said it was “truly heartbreaking” for staff to see so many patients die.