The first is from the Soveit Union and its military sciences , and these sciences are outdated after the great scientific and military development that the world has witnessed , so Russia is the heir to this science by decades overtaking it , while the Ukranian army didn’t develop yourself and satays in its same place.

The second ways is from Israel , and cooperation with Ukrane,but the occupation authorities didn’t provide any military knowledge to keive and used this cooperation only in the field of security, information and espionage , while Ukraine found this relation a cover for it to open good relation with successive US governments and a reputation to confront its enemies.

The Failure in Marketing for  the Ukrainian Weapons

Ukrainian weapons were famous all over the world ,as they are old devices that have been modernized and have begun to be promoted in the third world countries, and only weak armies including the armies of African and Asian countries , do not care about the status and strength of their army.

This was an an occasion for Ukraine to put forth weapons that it said it had manufactured or developed, including shoulder-fired missiles and other weapons that it is trying to promote in its military maneuvers, and it has proven to be a disastrous failure, given that the parallel army which is carrying maneuvers accepted it on the basis that the Ukrainian army is cooperative and friendly to the American army. That had drawn experience and strength, but it was proven otherwise. It became clear that the Ukranian weapon only works in the hands of unorganized militias, whether in Libya, Macedonia, Syria or Africa, and it is not suitable to be a major weapon approved by the regular armies being a weapon that was working on the fronts 33 years ago and is not suitable today, including the OSA-AKM launcher, which is similar to  PRG launcher , plus Strela and Terminator missiles for development.

Therefore, Ukraine sells army without any conditions, sometimes it sells them legally, and at other times it overlooks the buyer, his identity and the purpose of using this weapon.

Besides the Macedonia, which is facing Albanian rebels, Ukraine provided aircraft since the Soviet era, with mercenary pilots, missiles launchers and tanks that were modernized.

Pakistan also fills into the tape in which Macedonia fell and tried to develop its old weapons as t bought T-84UD at with a cheap price.

Knowing that the age of this weapon dates back to World War II and it has nothing but rudimentary optical equipment compared to its competitors.

Reports indicate that most of of the weapons of the former Soviet Union are outdated and must be destroyed due to their their lack of international standards of weapons and technology at the presnt time , and that they maybe dangerous even if they are developed and modernized , but the current authority of the Ukranian defense industry is trying to align with the interests of the corrupt leadership in the  Ministry of Ukrainian Defense where  developers witnessed many corruption scandals. 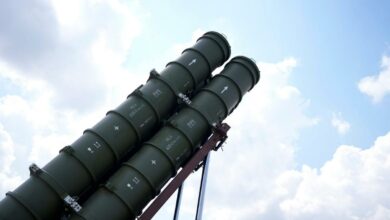