Ukraine’s president has warned Russians that continuing the invasion would exact a toll for “generations” after tens of thousands attended a nationalist event to hear a speech by President Vladimir Putin.

The remarks by President Volodymyr Zelenskyy on Saturday came after a mass rally was held in support of Russian forces in Moscow the previous night.

Noting the 200,000 people reported to have attended the rally was similar to the number of Russian forces deployed to Ukraine, Zelenskyy said Friday’s event in Moscow illustrated the high stakes of the largest ground conflict in Europe since World War II.

“Picture for yourself that in that stadium in Moscow there are 14,000 dead bodies and tens of thousands more injured and maimed,” the Ukrainian leader said. “Those are the Russian costs throughout the invasion.”

Putin lavished praise on his country’s military forces during Friday’s flag-waving rally, which took place on the anniversary of Russia’s 2014 annexation of Crimea from Ukraine. The event included patriotic songs such as “Made in the USSR”, with the opening lines “Ukraine and Crimea, Belarus and Moldova, it’s all my country”.

“We have not had unity like this for a long time,” Putin told the cheering crowd.

Taking to the stage where a sign read “For a world without Nazism”, he railed against his foes in Ukraine with a claim they are “neo-Nazis” and insisted his actions were necessary to prevent “genocide”.

Why is the US unequivocal in its support for Israel? Are you still watching? Netflix misses subscriber target by 1.2m 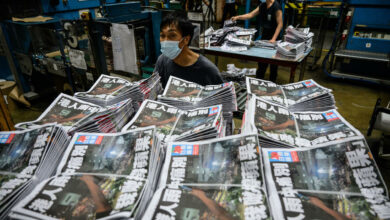