The International Committee of the Red Cross (ICRC) hopes the successful evacuation of civilians from the besieged steel plant in Mariupol will pave the way for more people to get out of the complex, a senior ICRC official said.

“Experience shows that a successful action helps further evacuations because now both sides have seen that it works. We hope that we can now build on this minimum of trust,” Dominik Stillhart, the ICRC’s director of operations, told Swiss newspaper Neue Zuercher Zeitung.

Stillhart said that it was “extremely frustrating” that it took weeks of painstaking work to get Russian and Ukrainian authorities on board and to work out logistic details so that combatants at every checkpoint knew when buses would drive by.

The territorial defence headquarters of the self-declared Donetsk People’s Republic (DPR) said that 50 more people had been evacuated from the besieged Azovstal steel factory in the Ukrainian city of Mariupol, according to Russia’s Interfax news agency.

Around 50 civilians had been evacuated on Friday to a reception centre in nearby Bezimenne, in the separatist DPR, whose forces are fighting alongside Russian troops to expand their control of large parts of eastern Ukraine.

Russia has held its final rehearsal for an annual parade marking the Soviet victory in World War II, where its military might will be showcased amid Moscow’s campaign in Ukraine.To mark the 77th anniversary since victory in what Russia calls the Great Patriotic War, thousands of soldiers will march across the Red Square in Moscow on Monday followed by tanks, armoured vehicles and missile launchers.

According to Russia’s defence ministry, 77 aircraft will participate in the flypast, including the rarely-seen Il-80 Doomsday plane that is capable of withstanding a nuclear attack.

Eight Mig-29 fighter jets will fly over Red Square forming the letter Z – a symbol of Russia’s military campaign in Ukraine. On the ground, Russia will be displaying its nuclear-capable hardware, including the Yars intercontinental nuclear missiles and Iskander short-range ballistic missile systems.

Transnistria, a breakaway Russian-backed territory in Moldova bordering on Ukraine, said there have been renewed attacks on its territory. 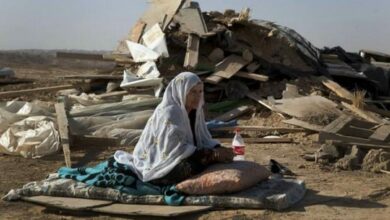 UK’s contaminated blood scandal inquiry: All you need to know