British Prime Minister Boris Johnson said on Thursday a British warship was acting legally in international waters after a confrontation with the Russian military off the coast of Russia-annexed Crimea.

“I think it was wholly appropriate to use international waters,” Johnson told reporters. “The important point is that we don’t recognize the Russian annexation of Crimea.”

Russia’s foreign ministry said on Thursday that an incident with a British warship could have serious consequences and that the Black Sea region was becoming an area of military confrontation, the Interfax and RIA news agencies reported.

Russia accused Britain on Thursday of spreading lies over a warship confrontation in the Black Sea and warned London that it would respond resolutely to any further provocative actions by the British navy off the coast of Russia-annexed Crimea. Russian forces fire warning shots at British Navy ship in Black Sea, UK denies it

Britain’s ambassador will be summoned to the Russian foreign ministry on Thursday, the ministry’s spokeswoman said, after an incident in which Russia said it fired warning shots at a British destroyer in the Black Sea. India says Omicron shows up on tests, advises states to ramp up checks 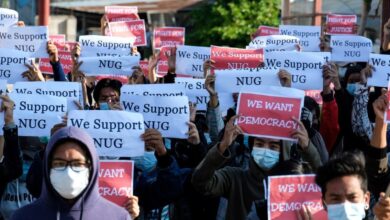 Prominent Myanmar filmmaker arrested after a year on the run