Finance minister Rishi Sunak ploughed more money into Britain’s 200 billion-pound ($262 billion) economic rescue on Thursday in a coordinated move with the Bank of England, which will buy more of the bonds being sold to fund it.

A widespread surge in coronavirus infections has forced Prime Minister Boris Johnson to announce a new one-month lockdown in England, and has prompted a series of further spending pledges by Sunak to stem the rising tide of job losses.

The announcement is Sunak’s fourth major revision to his economic plans in six weeks. Critics said he had failed to plan far enough ahead and was plunging businesses into confusion.

Sunak extended his costly coronavirus furlough scheme, which provides 80 percent of the pay of temporarily laid-off workers, until the end of March and he announced billions of pounds in other forms of support.

“It’s clear the economic effects are much longer lasting for businesses than the duration of any restrictions, which is why we have decided to go further with our support,” he told parliament.
Earlier, the Bank of England said it was increasing the size of itsgovernment bond purchases by 150 billion pounds ($196 billion).

BoE Governor Andrew Bailey told reporters that coordination between the central bank and the government did not compromise the BoE’s independence.

As well as the furlough extension, Sunak increased support for self-employed people and raised funding for Scotland, Wales and Northern Ireland by 2 billion pounds to 16 billion pounds.

That all added to the eye-watering cost of the government’s coronavirus response.

The furlough scheme extension was expected to cost around 1 billion pounds a month for every 1 million people using it.

Britain is heading for a budget deficit of around 20 percent of gross domestic product in the current financial year, its widest since World War Two.

Despite the spending, the country faces the worst peak-to-trough contraction of any Group of 20 economy, Moody’s said on October 16 when it cut Britain’s credit rating. 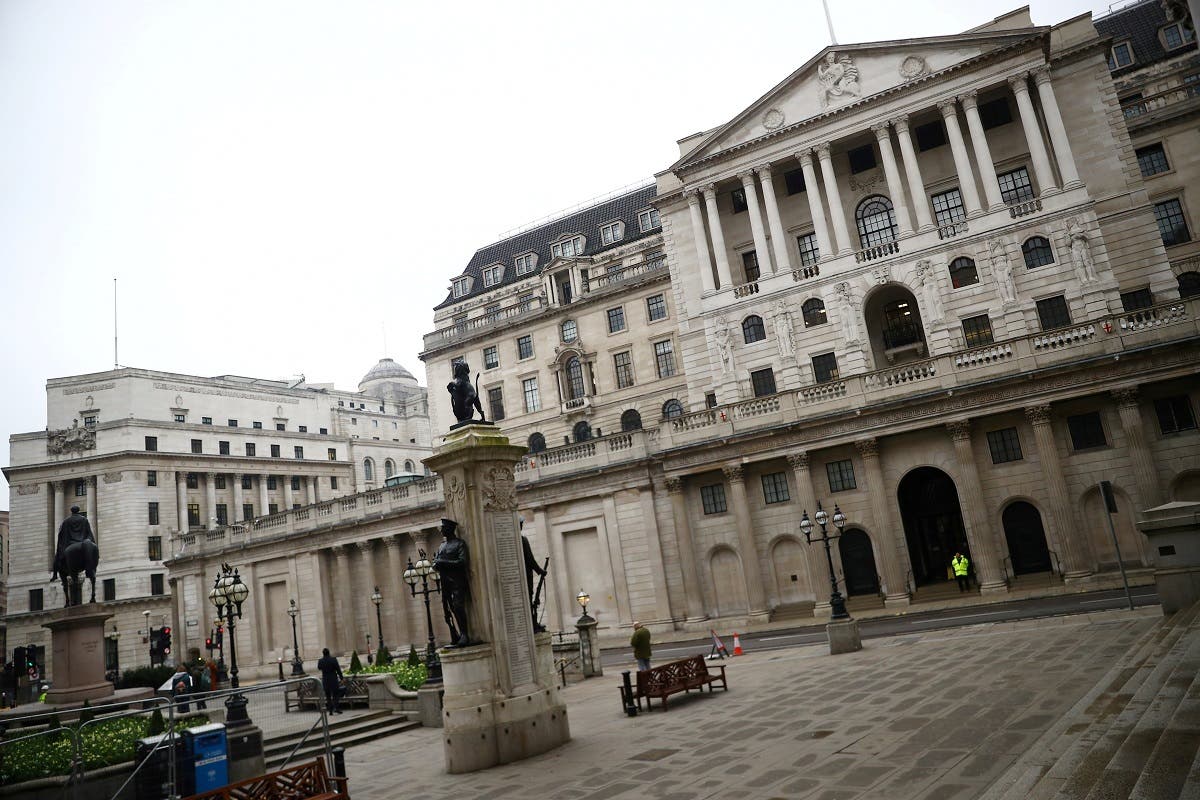 A general view of The Bank of England in London, Britain. (Reuters)

The BoE said it expected that Britain’s unemployment rate would peak at nearly 8 percent in the second quarter of next year, much higher than its most recent reading of 4.5 percent.

The opposition Labour Party accused Sunak — who announced a plan in September to replace the furlough program with a less generous scheme — of failing to see the risks ahead.

“We need a chancellor who’s in front of the problems we face, not one who’s always a step behind,” Labour’s would-be finance minister Anneliese Dodds said.

“The chancellor can change his mind at the last minute, Mr Speaker, but businesses can’t.”

Sunak had previously resisted extending the furlough scheme, saying it was wrong to “keep people trapped” in jobs that may not survive the crisis.

Business groups broadly welcomed the additional support but warned that chopping and changing was hurting firms.

“Employers have been left confused by the government’s plans to protect jobs over the last few weeks, with many redundancies triggered over the uncertainty,” Peter Cheese, chief executive of the Chartered Institute of Personnel and Development, said.

Sunak said it was right to change policy when the underlying facts changed.

The furlough policy will be reviewed in January to see whether employers are able to increase their contributions from their current level of 5 percent of total employment costs, or about 70 pounds per employee per month.

The Institute of Fiscal Studies chief economist Paul Johnson said the job schemes were wasteful and did not target specific sectors where jobs could best be saved.

The furlough scheme supported nearly 9 million jobs at one point and had been forecast to cost around 52 billion pounds over its eight-month lifespan, before the latest extensions.

The finance ministry said evidence from the first lockdown showed that the economic effects were much longer lasting for businesses than the duration of lockdown restrictions.