A 26-year-old cabbie has won Dh40,000 worth of gold coins after getting his fiancée a Dh1,600 gift – which he said was the biggest purchase he has ever made.

He was one of the lucky winners of a raffle draw that the Dubai Gold and Jewellery Group (DGJG) recently held for the landmark 25th edition of the Dubai Shopping Festival.

Bangladeshi expat Ghulam Mustafa, who has been driving a taxi in Dubai for the last six years, was preparing for his wedding, scheduled at the end of the month in his home country, when he came across some offers at the ongoing DSF.

“I have never thought about buying gold in my life, but I wanted to give something special to my fiancée at our wedding. When I went to one of the jewellery shops at a mall, I was told that with every jewellery purchase of Dh500, I would be entitled to one raffle coupon that could win me a number of gold coins in raffle draws,” he said.

“I went ahead and shopped for Dh1,600 gold that included a ring and a chain – the most I have ever spent on shopping.”

A couple of days later, Ghulam received a call from a DGJG representative, informing him that he won 25 special edition ‘Dubai City of Gold’ coins, each weighing 8g.

He thought he was being pranked. “Initially it was very difficult to believe that I had actually won. I used to hear stories about people winning, but I always thought that I can’t be that lucky. I repeatedly asked the person on the phone to confirm if it was really me,” the cabbie told Khaleej Times.

Mustafa, who earns about Dh3,000 a month, said limited job opportunities in his country brought him to the UAE and, being the sole breadwinner of his family, he shoulders the responsibility of taking care of his parents and siblings.

A mother-and-daughter duo also got lucky as they won Dh34,000 worth of gold at the DGJG draw. Archana, 20, and her mother Meenakshi Sunil, 43, were in Dubai for a six-day visit to meet her father who works in Dubai.

Since Meenakshi has a habit of investing money in gold, she and her daughter bought Dh23,000 worth of jewellery from a store at the Deira Gold Souk on December 28.

“We bought two chains, one was a 40g chain, another for 12g, along with a couple of bangles. On December 31, Archana received a call, and I also got a call on January 1 from DGJG, informing us that we had won 15 and 10 special editions ‘Dubai City of Gold’ coins, respectively,” said an excited Meenakshi.

Asked what she would do with the gold coins, Meenakshi said: “It’s like a new year gift to me and my daughter. I am not going to use these coins. I will keep them safe and use it only for something auspicious or very important.”

Ten gold coins worth Dh15,000 was also won by Dubai-based Indian expat Sobin T. Babu, whose wife Reshma Sobin and their one-year-old son Dakshan Sobin were in town with him on a visit till January 11.

“I wanted to give a parting gift to my son, so I bought him a gold bracelet worth Dh1,600. My wife filled out the coupons in his name even if I discouraged her, saying I have never even won a pen in my life,” Sobin told Khaleej Times.

“In the car, Dakshan even played with the coupons and tore one of them, but we didn’t care much until the next day when I got a call from the DGJG, saying our raffle ticket had won us some gold coins.

“I rushed to my car to retrieve the partially damaged coupons and luckily got two of the three raffle tickets intact,” 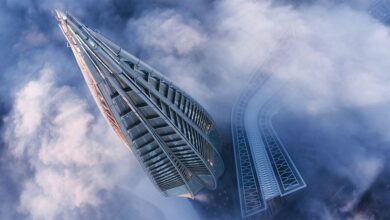 The Art of Building 2021 winners revealed

Diaspora African-Muslims Achieved a Lot. See For Yourself!