The plane filled with relief aid went to Warsaw. Salem al-Kaabi, UAE ambassador to Ukraine, reiterated the UAE’s support for efforts to reach a political solution to the ongoing war between Russia and Ukraine. The Emirati diplomat also stressed his country’s keenness to strengthen regional and international stability.

“The UAE continues to provide relief based on [the principle] of humanitarian solidarity to help people overcome humanitarian crises and mitigate the suffering of particularly women and children,” Kaabi said.

For his part, Ukraine’s Deputy Foreign Minister Dmytro Senik thanked the UAE for its efforts and immediate response to help the humanitarian challenges in Ukraine. Senik’s comments were made following a meeting with the UAE Minister of State for International Cooperation Reem bint Ibrahim al-Hashemy.

The UAE announced in early March that it would donate relief aid worth $5 million to Ukrainian civilians affected by the conflict.

Russia launched a multi-pronged attack on Ukraine on February 24, which President Vladimir Putin claimed was a special military
operation.

But the conflict has escalated to become the largest military invasion in Europe since World War II, and it has seen more than 4.6 million people flee abroad and killed or wounded thousands. ‘All is lost’: Floods in India’s Assam leave trail of destruction

Andrew Cuomo’s sexual harassment scandal: What we know so far 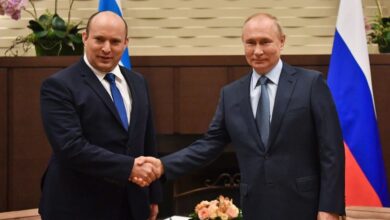