At least 1,000 people filled the South Lawn of the White House Tuesday morning as officials from the UAE, Bahrain and Israel signed a historic agreement – brokered by the United States – to normalize ties.

After speeches from each official, the four men sat at the table to sign what has become known as the “Abraham Accords.” They were signed in Arabic, English and Hebrew.

While Israel is set to go back into lockdown, Netanyahu and his wife ditched their face masks while at the White House.

Tens of White House staff and officials were seen without face masks, while over 100 journalists gathered to attend and cover the event.

One member of the Secret Service told Al Arabiya English that it was “by far” the largest gathering at the White House since the outbreak of the pandemic.

Diplomats and officials praised the Abraham Accords, which they say will increase the chances for peace in the Middle East.

A senior Emirati official said before Tuesday’s event that the signing would allow the UAE to more effectively help the Palestinians and their ambition for statehood and justice. “Our peace will serve the cause in a way we cannot predict today,” UAE Assistant Minister for Cultural Affairs and Public Diplomacy Omar Ghobash said in a webinar.

Terje Rod-Larsen, the former United Nations Special Coordinator for the Middle East Peace Process, said the UAE and Bahrain’s move would also help the Palestinian cause while also being a positive step toward peace in the region.

“There is no point in making friends with your friends because they are friends. You must make friends with your enemies and change their attitudes and actions,” Rod-Larsen told Al Arabiya. “And I see [this] … as a first step in that direction.”

At a lunch hosted by Trump after the ceremony, the US president said many more countries would join in normalizing ties with Israel. “I can tell you from personal knowledge, five, six or even seven are wanting to get in it. Get something signed, really quickly, so it’s something we should all be very proud of,” he said. 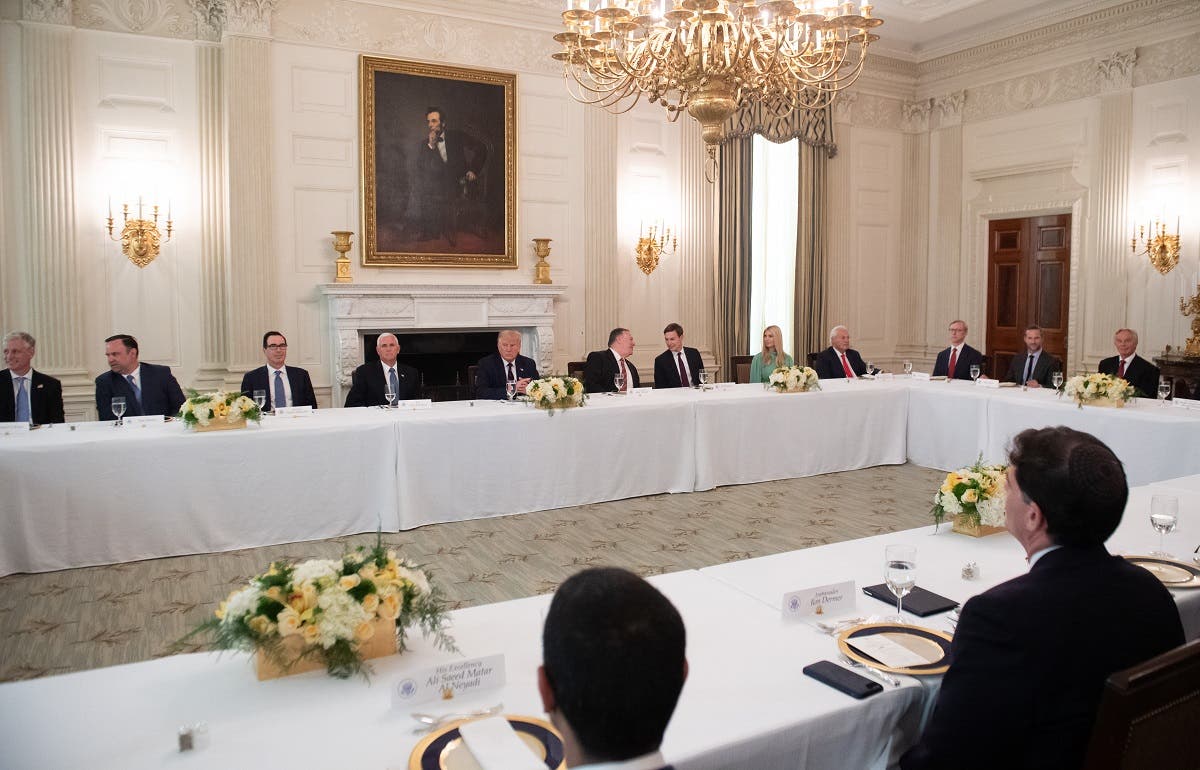 US President Donald Trump hosts a lunch at the White House following the signing of the Abraham Accords, Sept. 15, 2020. (AFP)

Domestically, many members of the US Congress and Senate were in attendance, along with senior officials. Trump faces a Democratic party that has criticized his response to the coronavirus and has sought to play down the importance of Tuesday’s breakthrough between Arab states and Israel.

Nevertheless, Democratic officials were in attendance to witness the signing of the Abraham Accords. Longtime Democratic Congressman Eliot Engel, the chairman of the Congressional Foreign Affairs Committee, was one of the few Trump rivals at the White House.

A handful of pro-Palestinian protesters demonstrated outside the White House on Tuesday, against the deal. “Free, free Palestine,” the protesters shouted as they waved the Palestinian flag.

On the other side, around a dozen Israeli protesters gathered to condemn Netanyahu for what they say are acts of corruption.

“Yes to peace. No to corruption,” signs read with pictures of Netanyahu.

Although the two groups of protesters became entangled in a short verbal spat, no violence was witnessed.

Palestinian leader Mahmoud Abbas said Tuesday only an Israeli withdrawal from occupied territories could bring peace to the Middle East, as the UAE and Bahrain signed normalization accords with Tel Aviv.

“Peace, security and stability will not be achieved in the region until the Israeli occupation ends,” he said in a statement after the signing in Washington of the deals, condemned by the Palestinians as a “betrayal” of their cause.