The normalization agreements between Israel and UAE and Bahrain provide the Palestinian Authority with an opportunity to engage productively with the Israeli government, James Cleverly UK Minister for Middle East and North Africa told Al Arabiya.

“Ultimately the UK’s position remains the same, that we want to see a safe, secure, prosperous Palestinian state alongside a safe, prosperous Israel, with East Jerusalem as a shared capital and along the 1967 borders,” Cleverly added. “We really hope that this provides a catalyst for a resumption of a good working relationship between the Palestinian Authority and the government of Israel.”

Bahrain and the UAE became the third and fourth Arab countries to normalize ties with Israel, following Jordan’s 1994 peace treaty with the Jewish state and Egypt’s peace deal in 1979.

The UK minister stressed that his country’s position on Iran was consistent in that it wanted Tehran to steer away from pursuing nuclear weapons and to stop interfering in the affairs of its neighboring countries in the region.

Cleverly listed the conditions upon which the UK’s relationship with Iran would be “more similar to other relationships we have with countries around the world and around the region.”

“Iran does need to step back from interference beyond its borders; it does need to step away from any attempts to become a nuclear weapons state and if it were to take steps in that direction we would welcome that and we would wish to see our relationships normalized,” he said.

“But unfortunately, at the moment, we have not seen that kind of action from Iran and we will work with our international partners to ensure that there is regional peace and regional stability and that nothing Iran does should in anyway upset that,” he added.

Iran has a long history of arming and financially supporting its network of proxies – Shia militias across the Middle East – to further its influence in the region.

Cleverly stressed that the UK wants peace in Libya, which is currently mired in a civil armed conflict with foreign countries backing different side.

“We want to see a de-escalation in Libya, we want to see both arms and foreign fighters removed from the country and a political dialogue to drive the settlement there,” he said.

“The Libyan people have suffered for such a long time and there cannot be a military solution, it has to be a negotiated political solution and we will work to bring the sides together to talk under the umbrella of the United Nations to bring about peace so that the Libyan people can get on with their lives,” he added.

Libya has plunged into chaos since the 2011 toppling of dictator Moammar Gaddafi.

Clashes between the two main warring parties in the North African country, the Libyan National Army (LNA), commanded by Khalifa Haftar and the Government of National Accord (GNA), led by Fayez al-Serraj, have intensified recently.

Many foreign powers have backed different sides of the conflict with varying degrees of support, with the most prominent countries being Turkey backing the GNA and Egypt backing the LNA. Israel to provide information to US on basis for NGO closures: State Dept 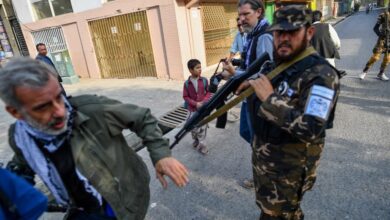