Embattled Syrian tycoon Rami Makhlouf, who has claimed he is being unfairly targeted by the regime headed by his cousin Bashar al-Assad, posted on Saturday that he had donated to his own charity – despite the government recently ordering his assets to be seized.

Makhlouf has become embroiled in a public spat with the Syrian government, releasing a series of videos in which he claimed that his employees at Syriatel – Syria’s largest telecom provider and one of the central pillars of Makhlouf’s sprawling business empire – were being unfairly arrested by security services.

On Friday, the dispute escalated when a Syrian court placed a temporary travel ban on Makhlouf, who has refused to pay money that the government says is owed and said that the government’s arrest of managers at the company will be a “catastrophe” for the Syrian economy.

The following day, Makhlouf posted an Eid Mubarak message on Facebook in which he said he had donated around 1.5 billion SYP ($2.9 million) to his al-Bustan charity and said he aims to continue “providing humanitarian services to those who deserve them sincerely and honestly.”

The donation is reportedly about 1 percent of the amount the government has asked him to pay.

New statement from #Rami_Makhlouf * Urging secret services to stop arresting loyalists and patriotic Syrian”
* release his aids in SyriaTel
* donation to poor and wounded soldiers
*commenting on his brother Ehab: The path of truth is tough… the brother would leave his brother. 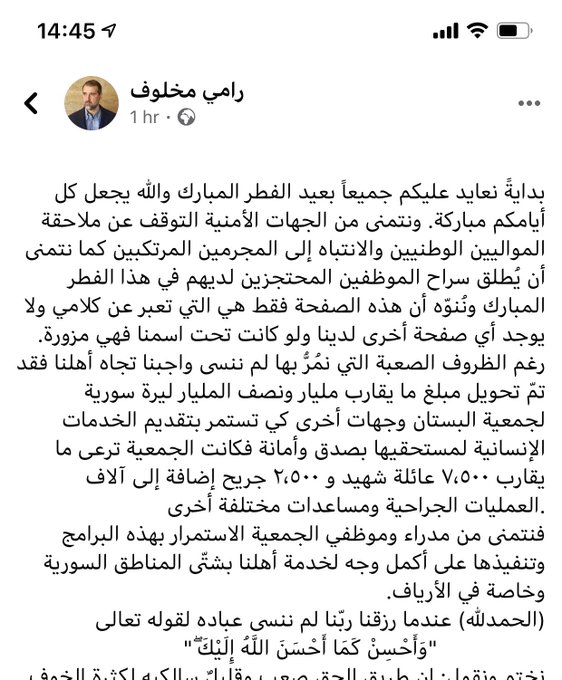 Makhlouf framed his donation to wounded soldiers and appealed to the security services to stop arresting “loyalists.”

According to Makhlouf, al-Bustan “was caring for about 7,500 martyr families and 2,500 wounded, in addition to thousands of surgeries and various kinds of aid.”

Makhlouf’s posts have been interpreted as a deliberate appeal to the Alawite community, a key bastion of support for the regime that has provided an important source of recruits for the army during the nine-year-long war in Syria.

According to Asharq al-Awsat, his appeal to “the poor and the loyal” is part of a rift at the heart of the Syrian regime with Makhlouf’s status as the economic power behind the throne reportedly being challenged by a new group of businessmen around Asma al-Assad, Bashar’s wife.

While Makhlouf publicly presents himself as a patron of the Alawite community, the Syrian Trust for Development – in which Asma chairs the Board of Trustees – has launched a campaign to pay financial grants to families in various regions, reported Asharq al-Awsat, citing unnamed sources familiar with the matter.

Syrian businessman Rami #Makhlouf has released a second video appealing to his cousin President Bashar al-Assad, alleging that Syrian security officials have been arresting his employees despite his previous support for them. #Syriahttps://english.alarabiya.net/en/News/middle-east/2020/05/03/Syrian-tycoon-Rami-Makhlouf-releases-video-says-cousin-Assad-arresting-his-employees.html … 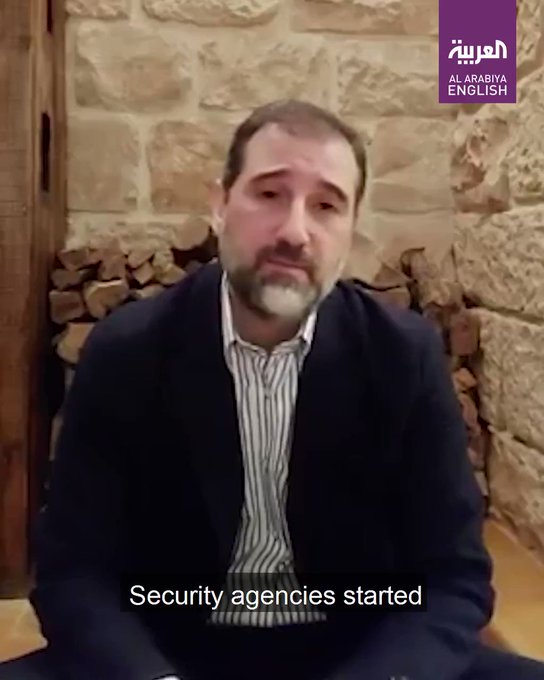 Makhlouf also seemed to confirm reports that his brother Ihab had stepped down from his deputy role at Syriatel and pledged his loyalty to President al-Assad.

“I want to ensure that I was not pressured to step down from any side and that my resignation was a result of differences with the chairman of the board at Syriatel Mr. Rami Makhlouf over his dealings with the media over the legal and financial files toward the government,” he wrote.

Rami acknowledged the incident in Saturday’s post, saying: “The path of truth is difficult and not many take that path out of fear, to the point where a brother would leave his own brother out of fear that injustice would happen to him.”

Rami reportedly appointed his younger son Ali to fill the post, passing over his Dubai-based elder son Mohammad, who has gained a reputation for his playboy lifestyle through ostentatious Instagram posts. 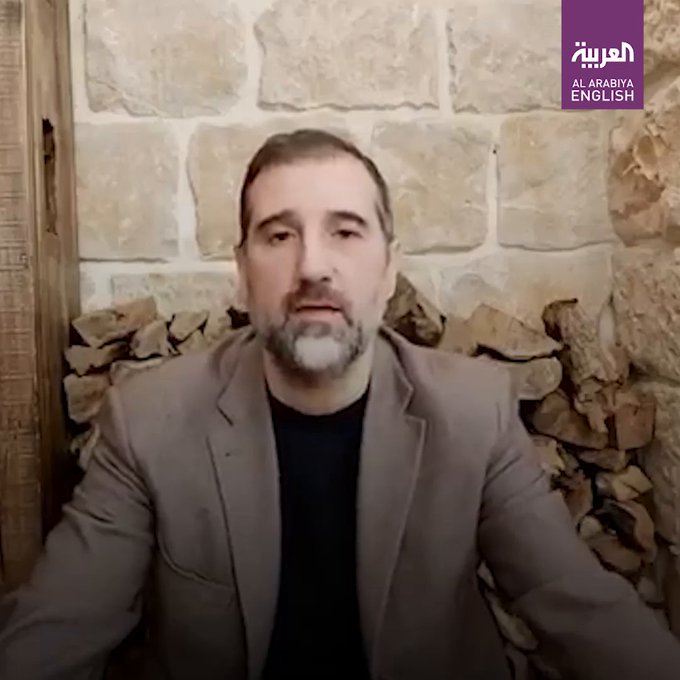