A Turkish philanthropist businessman and human rights defender denied accusations of espionage and attempting to overthrow the government in connection with a failed coup four years ago, telling a court on Friday that he opposes all efforts to take over power by force.

Osman Kavala addressed the court from his prison in the outskirts of Istanbul through a judicial video conference system during the opening hearing of a new trial against him, which human rights groups have denounced as unjust and politically motivated.

Kavala, 63, was acquitted earlier this year of terrorism-related charges for allegedly organizing and financing mass anti-government protests that erupted in 2013. But as his supporters awaited his release from prison, authorities issued a warrant for his re-arrest, this time accusing him of links to a 2016 failed coup attempt.

The businessman faces a life term in prison if found guilty of the charge of attempting to overthrow the constitutional order and another 20 years for alleged “military and political espionage” against Turkey. Kavala denies the charges.

Academic Henri Barkey, who lives in the US and was also charged in the case, is being tried in absentia.

A 64-page indictment alleges Kavala and Barkey collaborated over the coup, which Turkey’s government says was orchestrated by a network headed by US-based Turkish Muslim cleric Fethullah Gulen. It cites as evidence mobile phone signals suggesting that Kavala and Barkey met in Turkey around the time of the coup attempt. Human rights groups have described the indictment as “absurd.”

Kavala told the court that his more than three-year pre-trial detention was a violation of his rights and amounted to “a kind of mental cruelty,” according to Punto 24 website which monitors freedom of expression trials in Turkey. He also rejected the charges against him saying he had opposed military coups throughout his life. 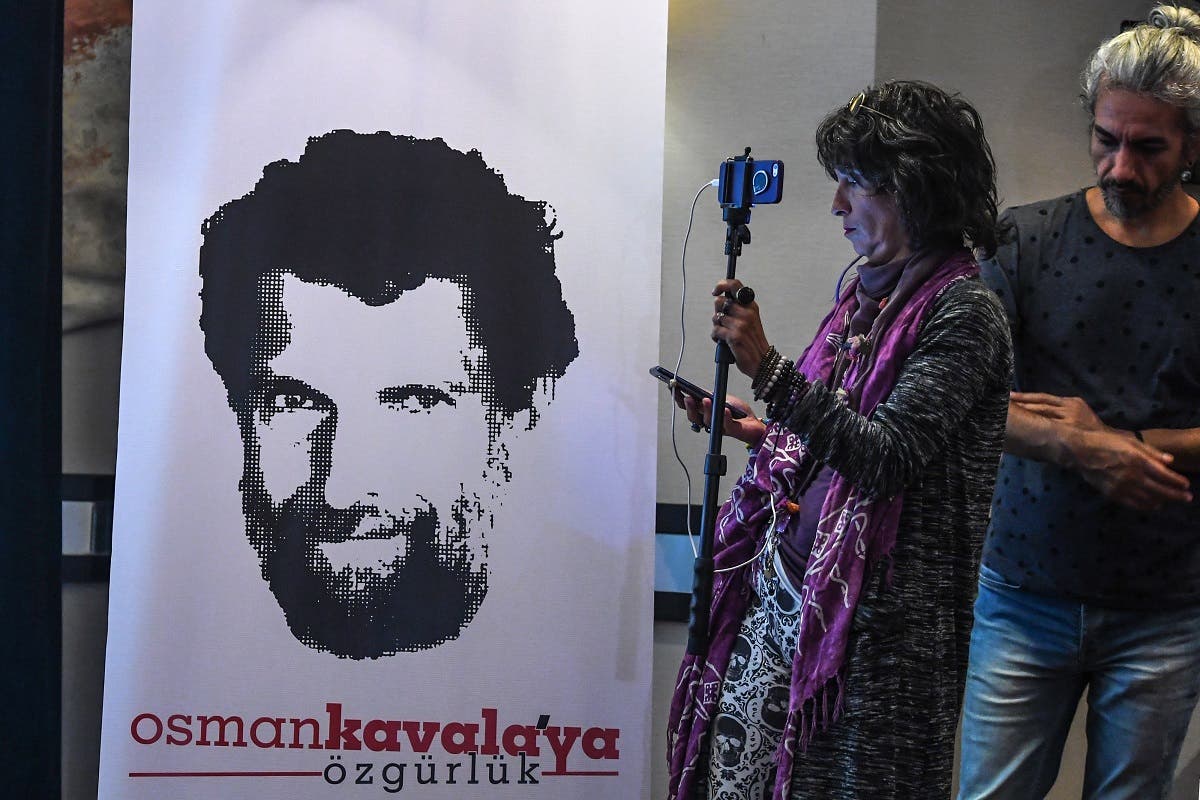 A journalist stands in front of a poster featuring jailed businessman and philanthropist Osman Kavala during a press conference of his lawyers on October 31, 2018. (AFP)

“My life experience, my world views and ethical values do not allow me to support coups,” Kavala said, adding that none of the evidence backed the accusations of espionage.

Kavala has been in prison since he was detained in October 2017, despite a European Court of Human Rights ruling for his release. Turkey’s Constitutional Court is reviewing his complaint challenging his lengthy pre-trial detention.

Several human rights groups have called for his immediate release and for all charges against him to be dropped, insisting that there is no evidence to support the accusations.

Turkish President Recep Tayyip Erdogan had in February criticized Kavala’s acquittal of the terror charges and had called for respect for the decision to re-arrest him. An investigation was launched into a panel of judges that acquitted him, casting a further shadow on the independence of the Turkish courts.

Kavala is known for his support of the arts and his funding of projects promoting cultural diversity and minority rights.

Erdogan, however, has accused Kavala of being the “Turkish leg” of billionaire US philanthropist George Soros, who the Turkish leader alleged has been behind insurrections in many countries.

Earlier this year, Kavala was the recipient of a Turkish human rights prize, and wrote a speech that was read on his behalf at the ceremony.

“The most burning issue for many of our citizens like myself is the erosion of the rule of law, one of the main pillars of the (Turkish) republic” Kavala wrote. “The judiciary does not act in accordance with the legal norms, but rather in line with the political priorities and instructions of the government.”

How does the coronavirus measure up against the world’s top causes of death? Over 100 unmanned vessels to be deployed in Gulf region’s strategic waters: CENTCOM