Turkish President Recep Tayyip Erdogan has spoken with his new Israeli counterpart Isaac Herzog, in a sign of a possible thaw between the two former allies after years of frosty relations.

The rare telephone talks between the two countries on Monday came after Erdogan, a vocal champion of the Palestinian cause during his 18-year rule, held talks on Saturday with Palestinian Authority President Mahmoud Abbas.

During that meeting, Erdogan told Abbas that Turkey would “not remain silent to Israel’s oppression in Palestine,” according to the Turkish presidency.

Israel and Turkey were once close regional partners but relations between the two countries soured in the past 10 years. The Turkish government frequently criticises Israel’s policies towards the Palestinians.

However, during his call with Herzog, Erdogan emphasised the “great importance” of Turkey-Israel ties for security and stability in the Middle East, the Turkish presidency said.

Erdogan also underlined Turkey’s emphasis on continuing dialogue despite differences of opinion, it added in a statement. The Turkish presidency said there was strong potential for cooperation between the two countries in fields including energy, tourism and technology.

According to a statement by the Israeli president’s office, Herzog and Erdogan said that “ongoing dialogue despite all the differences of opinion” was important, particularly for advancing steps towards a two-state solution between Israel and the Palestinians.

Herzog took office last week after he was elected by the Knesset, Israel’s parliament, in a June vote. He spoke Saturday with neighbouring Jordan’s King Abdullah II after Israel and Jordan agreed to initiate negotiations for the sale of water to the Hashemite kingdom.

Erdogan had late last year expressed a desire to see relations between Turkey and Israel improve, after years of disagreement over Israel’s occupation of the occupied West Bank and its treatment of Palestinians.

Turkey, which in 1949 became the first Muslim-majority country to recognise Israel, first broke off ties with Israel in 2010.

That was after 10 pro-Palestinian Turkish activists were killed by Israeli commandos who boarded a Turkish-owned ship, the Mavi Marmara, which was part of a flotilla trying to deliver aid and break Israel’s maritime blockade on Gaza.

The Israeli blockade of the Gaza Strip has been in place since June 2007, when Israel imposed a land, sea and air blockade on the coastal enclave.

They restored ties in 2016 but relations soured again in 2018. In May that year, Ankara withdrew its envoy over deadly attacks against Palestinians in Gaza who were protesting against US President Donald Trump’s decision to move the United States embassy from Tel Aviv to Jerusalem.

Erdogan and former Israeli Prime Minister Benjamin Netanyahu often exchanged angry remarks but both countries continued to trade with one another.

In August this year, Israel accused Turkey of giving passports to a dozen Hamas members in Istanbul, describing the move as “a very unfriendly step” which his government would raise with Turkish officials.

Hamas seized the besieged Gaza Strip from forces loyal to Palestinian Authority President Mahmoud Abbas in 2007 after winning legislative elections in 2006. Since then, Israel has severely intensified its siege and launched three protracted military assaults on Gaza.

During the latest bombardment in May, Erdogan accused Israel of waging “terrorism” and promised to rally the world to the territory’s defence.

The 11-day offensive killed at least 260 Palestinians, including 66 children and caused widespread damage to infrastructure and residential areas. On the Israeli side, 13 people were killed by rockets fired from Palestinian armed groups, including two children. 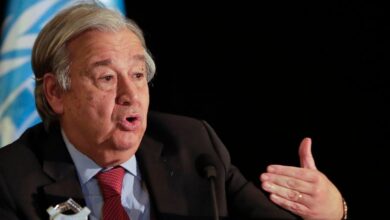