The Shaikh and artist were going at it!

One particular footage caused the engagement to go viral, it was when Meriem shared an image while dancing with Tunisian Shaikh Abdelfattah Mourou.

Ben Moulehem shared the picture with her 173k followers on Instagram as she and the Shaikh were holding hands and dancing.

Meriem Ben Moulehem captioned the picture: ‘It was an honor to me that Shaikh Abdelfattah Mourou and his son attended my engagement party. I would also thank his virtuous wife who I adore. Whoever is trying to create envy and malice, collapse and die. I am the queen.’

The image went viral soon after Meriem shared it, and comments varied between criticizing the Shaikh and supporting him.

Many followers accused Meriem that she intended to create controversy by selecting to publish this specific image.

Others criticized Mourou, stressing that he had insulted his stature as a prominent cleric, rights activist and politician. 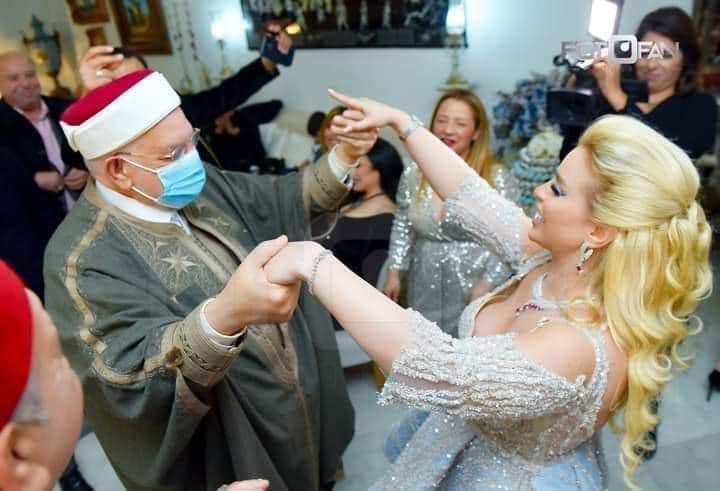 Tunisian journalist Buthaina Quaia wrote on Facebook: “Unlike many, I liked the image that expresses personal freedom. You have the right to dance, as people do not know dancing; they do not know revolution eaither.”

As for activist Rashid Soleimani, he wrote: “How come Professor Abdelfattah Mourou allowed himself to reach this level?! What does he want to convey to us? this is recklessness and an offense to his age and stature far from what God and His Messenger commanded us to do.”

Former parliamentarian, Mohamed Naguib Kahila, wrote: “Abdelfattah Mourou is one of the most important who gave rhetoric speeches that inflamed religious sentiments, calling for fear of God, purification and chastity. He appeared in a way other than the one he was supposed to be, whether to his partisan, social or political standing.”

Mourou is known of his controversial statements and positions, and commentators recalled his participation in a “women’s session” in a café in Tunisia, and he also performed as a director in a TV comic program.

Tunisian artist Meriem Ben Moulehem was known to the Egyptian public, through her appearances in videos and photos with the singers like: Hassan Shakoush, Omar Kamal, and Hamo Beka.