President Trump’s message of protecting statues stretched beyond U.S. borders this weekend when the campaign used an image of Christ the Redeemer in Brazil in a series of Facebook and Instagram ads.

‘We will protect this,’ read the ads, attached to the accounts of President Trump and Vice President Mike Pence, with visuals of the giant Jesus statue that is a recognizable piece of Rio’s skyline.

The digital ads launched Friday and by Monday were ‘inactive,’ according to Facebook’s ad details page. The Daily Beast first reported on their existence.

A spokesperson for the Trump campaign has yet to respond to DailyMail.com’s request for comment. 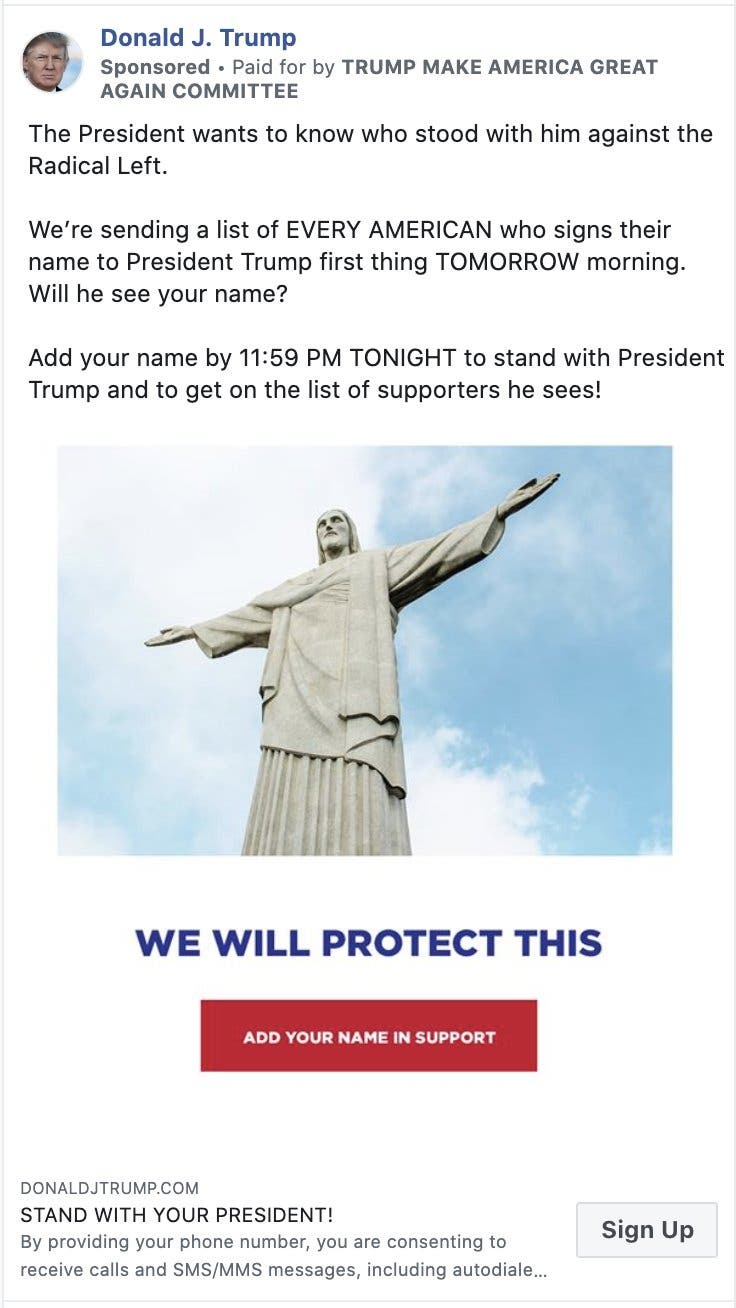 The ad encourages Americans to sign up with the campaign to signal their support.

‘The President wants to know who stood with him against the Radical Left,’ the ads said.

According to Facebook’s metrics, the group mostly targeted with the ads were women over 65.

Trump has hitched his re-election fortunes to culture war topics including the destruction of statues and monuments by Black Lives Matter protesters.

The president hasn’t distinguished between Confederate monuments – the main targets of the controversy for their white supremacist links – and other statues that have been assaulted, including Andrew Jackson in D.C.’s Lafayette park and Christopher Columbus in Baltimore. A Jesus statue was vandalized in Peoria, Illinois over the weekend.

Trump has painted the protesters with a broad brush.

‘Angry mobs are trying to tear down statues of our Founders, deface our most sacred memorials, and unleash a wave of violent crime in our cities,’ Trump warned Friday night at his Fourth of July eve event at Mount Rushmore.

Trump has also pledged to veto a bill that would make the military rename bases that remain named for Confederate figures.

Polling shows that Americans have moved on the issue of removing Confederate statues, but not by much.

In a late-June Morning Consult survey, 47 per cent of registered voters thought the statues should remain standing, while 36 per cent said they should be taken down.

Like most hot topics there was a big political split.

Just 10 per cent of Republicans said they supported the removal of Confederate monuments, compared to 60 per cent of Democrats.

But even in 2020, 24 per cent of Democrats were against removal, with 78 per cent of Republicans in agreement.

In the same poll, voters were split 40 per cent to 40 per cent when asked if statues of slave-owners should remain or be removed.

A partisan tilt was present there too, with 61 per cent of Democrats supporting removal, while 69 per cent of Republicans wanting those statues to stay.

Voters were more inclined to punish someone who was an active racist.

When pollsters asked if individuals who made racist comments should still be honored, 45 per cent of registered voters said they should have their names removed, while 34 per cent said their names should be left in place.

If an individual supported racist policies, 50 per cent of voters said they should be scrubbed, while 33 per cent said their names should be left intact.

Doctors Shocked After Baby Girl Born Without an Anus in India

Libya Struggling Between Emerging Businesses and The ‘State Employee’ Mentality

The Risk of Tsunami Still Worries People in Indonesia