“The president’s statements this morning encourage illegal and dangerous acts. He is putting millions of people in danger of contracting COVID-19,” Inslee said in a series of tweets on Friday afternoon.
“His unhinged rantings and calls for people to ‘liberate’ states could also lead to violence. We’ve seen it before,” Inslee added. “The president is fomenting domestic rebellion and spreading lies – even while his own administration says the virus is real, it is deadly and we have a long way to go before restrictions can be lifted.”

Inslee’s tweets came after Trump apparently encouraged the growing protests against the stay-at-home restrictions aimed at stopping the coronavirus.
“LIBERATE MINNESOTA!” “LIBERATE MICHIGAN!” “LIBERATE VIRGINIA,” Trump said in a tweet-storm in which he also lashed out at New York Governor Andrew Cuomo for criticising the federal response. Cuomo “should spend more time ‘doing’ and less time ‘complaining,'” the president said.
The president’s tweets marked a different tone from the day before, when Trump said it was up to state governors to decide when and how to reopen their economies. The Trump administration on Thursday unveiled a phased approach to the reopening of the economy, saying governors would be calling their “own shots” while the federal government stood “alongside” them.

On Friday, responding to pleas from governors for help from the federal government in ramping up testing for the virus, Trump put the burden back on them: “The States have to step up their TESTING!”

Trump defended his tweets later on Friday, saying he was “very comfortable” with the posts. He accused the three states of doing “too much” and said he was not worried about those protesting against stay-at-home orders, despite the fact demonstrators have defied the administration’s social distancing guidelines.
Governors remain cautious

Trump has repeatedly expressed his desire to see businesses reopen quickly and claimed earlier this week that he possesses “total authority” over the matter, even though the lockdowns and other social-distancing measures have been imposed by state and local leaders, not Washington, DC.

Some states did take some of the nation’s first, small steps towards loosening restrictions.

In Florida, Republican Governor Ron DeSantis gave the green light for municipalities to reopen beaches and parks if they could do so safely. In Texas, Republican Governor Greg Abbott said stores could begin selling items curbside, non-essential surgery could resume, and state parks could reopen. 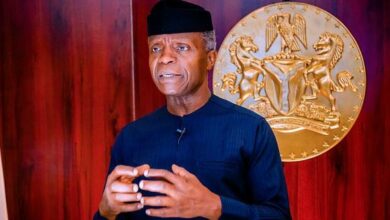 Nigeria: VP Yemi Osinbajo to run for president in 2023