Lebanese transgender Joelle Badr has revealed that she is female in every sense of the word, stressing that she would not have taken the decision to marry had it not been for her confirmation of the possibility of her pregnancy and childbearing.

Badr added that she might be pregnant, commenting: “I hope that my pregnancy would succeed, and if I miscarry and I am unable to have children, I have no problem of my husband marrying another.”

Joelle Badr continued: “My mother asked me not to reveal my suffering from congenital deformity for fear of society’s view, and she expressed her willingness to donate her womb to me to have children, as it turned out that I suffer from any problem.”

Joelle hoped that her daughter would be born in good health, and not suffer from any congenital deformities so that she would not live the tragedy Joelle went through.

During Joelle Badr’s appearance on “With Tamam” program hosted by Tammam Bleick, refused to describe her as a transgender woman, and explained the difference between her and her social media counterparts who publicly undergo a sex change operation, noting that she has medical documents and a legal fatwa confirming her birth with female organs, This allowed her to undergo the process of sexual correction in order to live a healthy and sound life.

Joelle Badr expressed her annoyance about the bullying and abuse of some people on social media, pointing out that she found her treatment and medicine with her husband Hussein Najdi, commenting: “My husband changed me, he made me feel my femininity, my importance and value in life”.

Badr talked about the reasons for her marriage to Hussain Najdi, saying: “He’s a real man.. He’s decent and money does not matter to him. My husband is the one who spends on me and does not take from me. He gives me money.”

Badr refused to talk about the issue of her imprisonment years ago, saying only that she was feeling lost, which led to her being affected by people who implicated her in some matters.

And regarding the four million dollars that she inherited from a man who refused to reveal his identity, Joelle Badr confirmed that she did not make any concessions in exchange for this amount, but that this man was like a father to her and contained her as a daughter and friend, and he always told her about his secrets.

Kim Kardashian And Kanye’s $2.1 Billion Divorce to Air on The Final Season of KUWTK 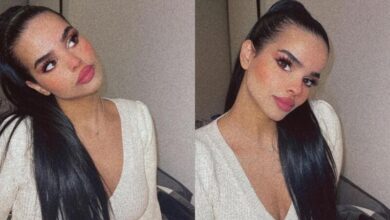 Diletta Leotta on Can Yaman: I Think I’m Still in Love With Him