Democrats’ momentum for a fresh drive to quickly impeach outgoing President Donald Trump has gained support, and a top Republican said the president’s role in the deadly riot at the Capitol by a violent mob of Trump supporters was worthy of rebuke.

Sen. Pat Toomey, R-Pa., said Saturday he believed Trump had committed “impeachable offenses.” But he did not explicitly say whether he would vote to remove the president from office at the conclusion of a Senate trial if the House sent over articles of impeachment.

“I don’t know what they are going to send over and one of the things that I’m concerned about, frankly, is whether the House would completely politicize something,” Toomey said Saturday on Fox News Channel, speaking of the Democratic-controlled House.

“I do think the president committed impeachable offenses, but I don’t know what is going to land on the Senate floor, if anything,” Toomey said. 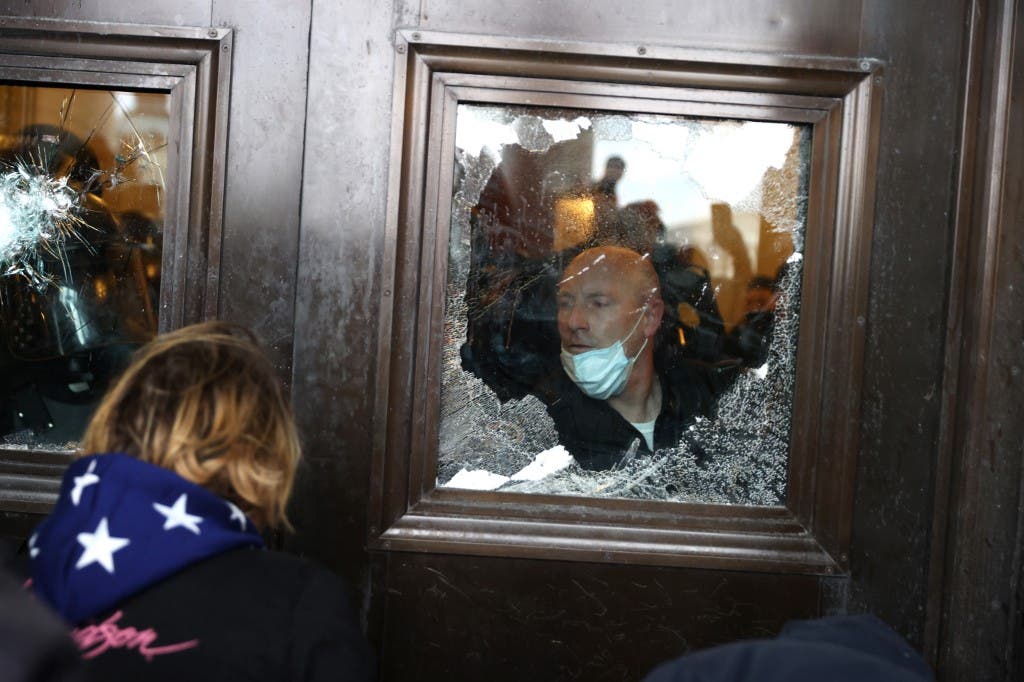 Capitol police officer looks oout of a broken window as protesters gather on the U.S. Capitol Building on January 06, 2021 in Washington, DC. (AFP)

Late Saturday, House Speaker Nancy Pelosi sent a letter to her Democratic colleagues reiterating that Trump must be held accountable — but stopped short of committing to an impeachment vote. Still, she told her caucus, “I urge you to be prepared to return to Washington this week.”

“It is absolutely essential that those who perpetrated the assault on our democracy be held accountable,” Pelosi wrote. “There must be a recognition that this desecration was instigated by the President.”

Pelosi said House Democrats “will be proceeding with meetings with Members and Constitutional experts and others.”

The new Democratic effort to stamp Trump’s presidential record — for the second time and days before his term ends — with the indelible mark of impeachment gained more supporters Saturday. Rep. David Cicilline, D-R.I, a leader of the House effort to draft impeachment articles — or charges — accusing Trump of inciting insurrection, said his group had grown to include 185 co-sponsors. 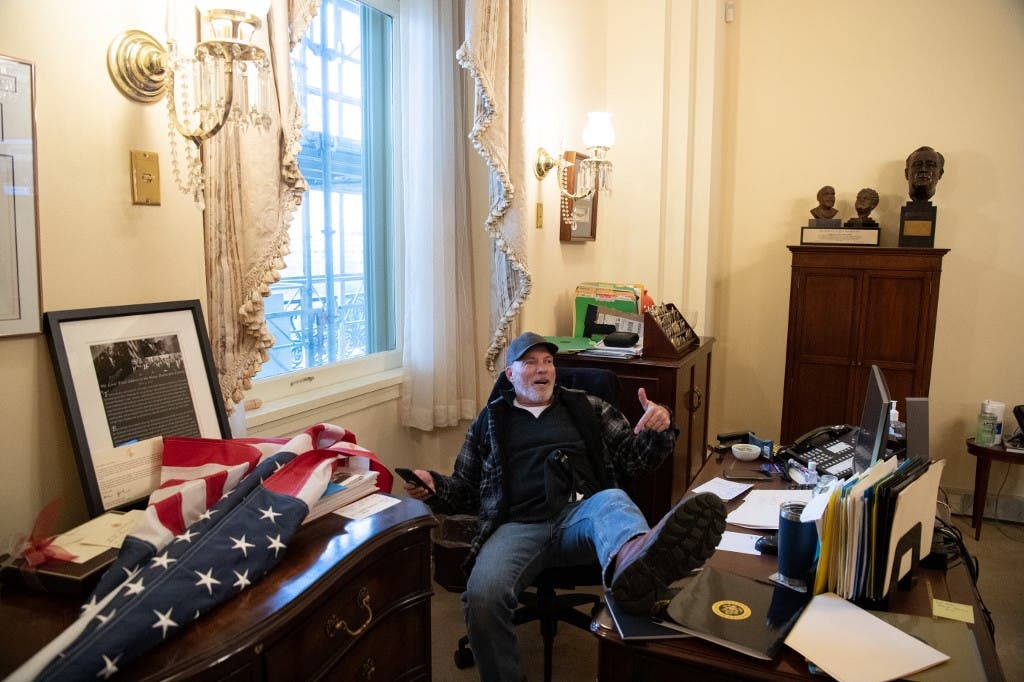 A supporter of US President Donald Trump sits inside the office of US Speaker of the House Nancy Pelosi as he protest inside the US Capitol in Washington, DC, January 6, 2021. (AFP)

Lawmakers plan to formally introduce the proposal on Monday in the House, where articles of impeachment must originate. If Democrats decide to move forward, a vote could be possible by Wednesday — exactly one week before Democrat Joe Biden becomes president at noon on January 20.

The articles, if passed by the House, could then be transmitted to the Senate for a trial, with senators acting as jurors who would ultimately vote on whether to acquit or convict Trump. If convicted, Trump would be removed from office and succeeded by the vice president.

Earlier Saturday, Pelosi told her San Francisco constituents during an online video conference that it is “a decision that we have to make.”

Potentially complicating that decision is what it means for Biden and the beginning of his presidency. While reiterating that he has long viewed Trump as unfit for office, Biden on Friday sidestepped a question about impeachment, saying what Congress does “is for them to decide.” 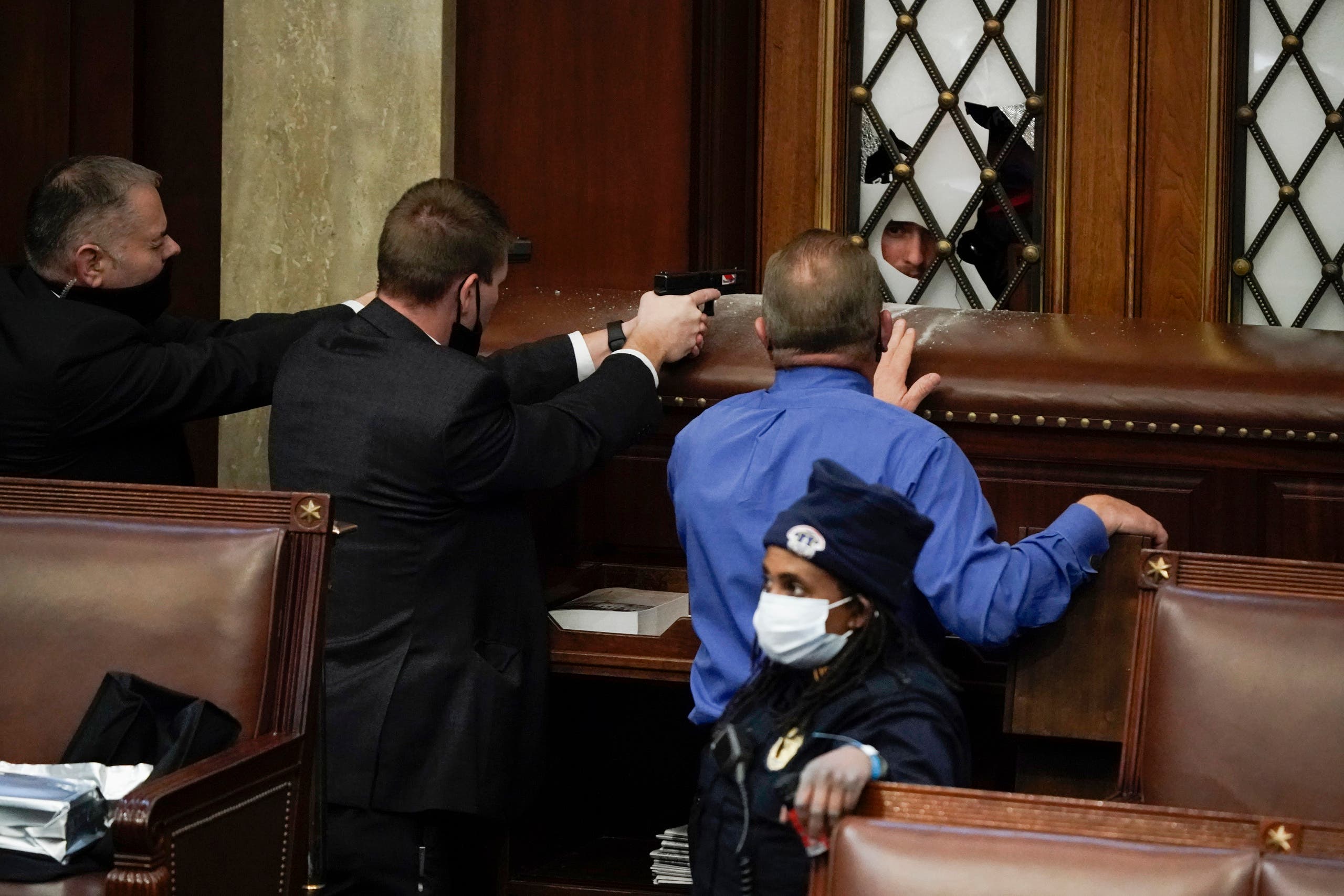 Police with guns drawn watch as protesters try to break into the House Chamber at the U.S. Capitol on Wednesday, January 6, 2021, in Washington. (AFP)

If the House decided to impeach, the soonest the Senate could begin an impeachment trial under the current calendar would be January 20, Inauguration Day.

A mob of Trump supporters overpowered police, broke through security lines and rampaged through the Capitol on Wednesday, forcing lawmakers to scatter as they were putting the final, formal touches on Biden’s victory over Trump in the Electoral College.

The crowd surged to the domed symbol of American democracy following a rally near the White House, where Trump repeated his bogus claims that the election was stolen from him and urged his supporters to march in force toward the Capitol.

Five people, including a Capitol police officer, died as a result of the siege.

UAE has no plans to travel to Israel following coronavirus lockdown, despite reports