TikTok users filmed the moment they say they unexpectedly discovered human remains inside a suitcase that was dumped on a waterfront in Washington state.

Seattle Police announced the discovery of two items of luggage that contained a dead body on Friday night.

The young people who say they found the first bag and alerted authorities, posted video footage from the shocking encounter at Duwamish Head on Saturday.

‘Something traumatic happened that changed my life,’ TikTok user UghHenry wrote in the caption of the video.

The social media user used the hashtags ‘crime’ and ‘murder’.

‘We found this black suitcase. We were joking that maybe the suitcase would have money…[But] the smell was overwhelming,’ the video captions explain.

In the clip the amateur videographer is heard tell one girl: ‘Open it! It stinks, yo.’

They are heard laughing before realizing that a black bag stuffed inside the suitcase may contain something sinister.

The caption states they felt a ‘little scared’ and ‘nervous’.

The clip then cuts to another girl calling 911 and authorities arriving at the scene on the 1100 block of Alki Avenue.

Police said they received a call about a suspicious bag on the beach near the water on Friday afternoon. They have not confirmed who contacted them.

Another bag was found nearby in the water on the 1100 block of Alki Avenue SW, according to the Seattle Police Department.

Investigators noticed that the bags contained human remains, prompting them to summon detectives to the area.

The remains were scheduled to be taken to the King County Medical Examiner’s Office for further analysis.

The people in the video only learned that it was human remains after checking the news later on.

The King County Medical Examiner is working to identify the remains and determine a cause of death.

Police have not released any more information.

‘I was stunned and shocked,’ West Seattle resident, John Rodie, told KING-TV. ‘It’s frightening to think that there’s someone out there that would do something like that.’

A video caption states that the Randonautica app sent them to that part of the beach.

The app encourages people to explore areas around them by using a random number generator to come up with a set of coordinates, according to Wired.

Users are told to set an intention before embarking on the trip and then report back later on whether they experienced any coincidences that suggest the universe fulfilled the intention.

‘There are two main parts to randonauting,’ Joshua Lengfelder, who founded the randonauting movement, told Wired. ‘Exploring blindspots or places nearby that are outside of your conscious awareness, and experimenting with mind-machine interaction; the hypothesis that consciousness can influence the distribution of random numbers.’ What Inspired a 7-year Old to Fast in Ramadan? 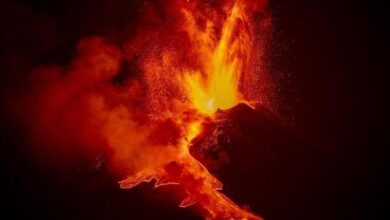 Mount Etna in Italy Spews Ash and Lava Yet Again