Three scientists have been awarded the Nobel Prize in physics for independent research over the course of half a century that has brought new understanding to the behaviour of tiny particles that make up the foundation of matter in the universe.

American researcher John Clauser, French scientist Alain Aspect of the University of Paris, and Austrian scientist Anton Zeilinger of the University of Vienna received the award Tuesday for independent studies on the interaction of particles such as photons and electrons. The Nobel Committee for Physics credited each with opening new possibilities in the field of quantum mechanics during an announcement at the Royal Swedish Academy of Sciences in Stockholm, Sweden.

The committee said the research holds broad implications in the fields of quantum computing and digital information security, which is seen as a “vibrant and rapidly developing field,” said Eva Olsson, a member of the committee.

“Its predictions have opened doors to another world, and it has also shaken the very foundation of how we interpret measurements.”

The research continues the vision of John Stewart Bell, a 1960s-era physicist who theorized that particles could work synchronously even if communication is cut off by distance — a process known as quantum entanglement.

Particles exist in pairs which have the ability to exist in multiple places simultaneously, according to quantum theory. They do not take on formal properties and are invisible to the naked eye, with scientists using special machines that bombard them with energy to redirect their movements and adjust their acceleration enough to be observable.

In this case, the scientists took measurements that for the first time showed mirroring between the pairings after the particles became separated.

The “groundbreaking experiments [utilized] entangled quantum states, where two particles behave like a single unit even when they are separated,” the committee said in a statement.

To test quantum entanglement, he fired photons in opposite directions and then measured the behavior of the particles, which showed replicated movements between them.

Aspect next led a team that took up the research throughout the 1980s, followed by Zeilinger who studied entanglement in the late 1990s.

Each year in October, the Nobel committees in Sweden and Norway announce the Nobel laureates for contributions in the fields of physics, literature and peace efforts

On Monday, Swedish scientist Svante Paabo was awarded the Nobel Prize in Medicine for his research that proved a genetic link between humans and ancient Neanderthals. Psychological Dramas Relished by The Turks! 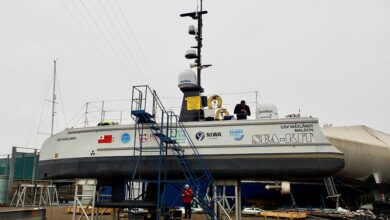 Holocaust survivor Michael Katz on how he escaped the Nazis