Thousands of undocumented migrants will now be allowed to apply to temporarily stay and work in Italy under an amnesty announced as the country unveiled a $59.6bn stimulus package to cushion the economic impact of the coronavirus.

After weeks of negotiations marked by political infighting and resignation threats, the parties in Italy’s coalition government finally reached an agreement on Wednesday to approve provisional changes to permits for farm workers and home carers.

Dino Martirano, a spokesman for Italy’s interior ministry, told Al Jazeera foreign labourers in the agricultural and domestic working sectors who have been without a valid residency permit since November will be able to apply.

According to the decree unveiled on Wednesday, the new residency permits will be valid for six months.

The changes also seek to legalise irregular work in farms and homes. Martinaro said employers who have irregularly hired either foreign or Italian workers in these sectors would also able to apply to regulate their staff by stipulating a fixed-term employment contract.

“We have reached an important result,” Prime Minister Giuseppe Conte said in a news conference after a cabinet meeting.

“This is a battle of civilisation because at its centre lay people’s dignity, fight against criminal organisations, against caporalato (a system based on the recruitment and exploitation of workers), the immersion of black work and the protection of employers and workers’ health, including the one surrounding them.”

The amnesty was pushed by agriculture associations across Italy looking for staffing to fill the gap left by at least 200,000 seasonal labourers, mostly from Eastern European countries, who are stuck in their countries due to coronavirus-related travel restrictions.

As a result, Italy is now at risk of losing 25 percent of its harvest, according to Italian leading Agriculture association Coldiretti.

“We got it,” Jean-Rene Bilongo, head of migration policy and inequalities at the CGIL-FLAI farmworkers’ trade union, said after the amnesty was unveiled.

“Thousands of migrants living at the margins of society will now become legal subjects – the invisibles become citizens,” he told Al Jazeera.

In a 2018 report, the CGIL-FLAI said an estimated 430,000 people were irregularly hired to work in farms across Italy. More than 16 percent did not enjoy any labour rights and 38.7 percent earned wages below rates set in collective bargaining agreements.

Bilongo said the regularisation could also help improve conditions for up to 180,000 people living in shantytowns at a time when the public health emergency is “far from over”. Activists have long warned that the informal settlements housing irregular workers lacked access to running water and sanitation and risked becoming coronavirus hotspots.

Yet, human rights groups decried the temporary nature of the amnesty.

“A time-limited amnesty is just a patch, an absurdity which gives priority to production over dignity,” said Cesare Fermi, director of migration programmes for INTERSOS, an NGO.

Calling the measure “a lost chance”, Fermi added: “How will the workers’ conditions change once the permit is over?”

In recent weeks, the issue of regularisation had threatened to tear apart the ruling coalition led by the anti-establishment Five Star Movement and the centre-left Democratic Party (PD).

The proposal was championed by Minister of Agriculture Teresa Bellanova, from PD, but it was opposed by the Five Star Movement which argued the move would only further legitimise labour exploitation instead of reducing it.

“An amnesty? Why should we ever reward those irregular and those who exploit them when there are so many Italians and regular migrants looking for a job?” Salvini said in a Twitter post late on Wednesday.

Italy has been hit particularly hard by the pandemic. To date, the virus has infected more than 220,000 people and killed nearly 31,000 across the country.

With infections appearing to ebb, the government is now grappling to get people back to work as it gradually lifts the drastic measures introduced to curb the outbreak. Conte said the stimulus package announced on Wednesday was aimed at helping businesses and families recover the coronavirus restrictions.

“We have worked on this decree aware that the country is in great difficulty,” Conte said. “It provides the prerequisites so that this phase of reopening can already offer the prospect of economic and social recovery.” 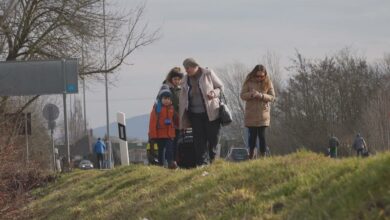